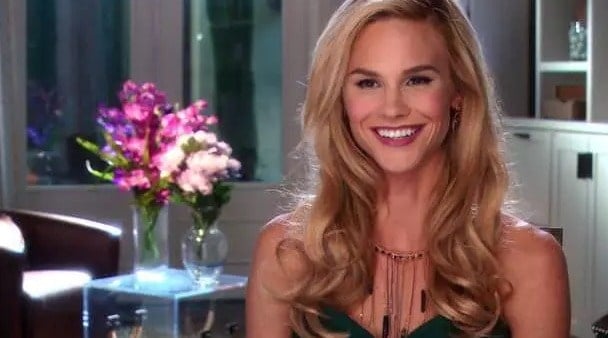 How you see Meghan O’Toole King is really a matter of whether you enjoy the screeching, drama-laden, booze-soaked soap opera that is Real Housewives of Orange County, or could trade it without question for reruns of Hee-Haw. For those younger readers look it up, the show made about as much sense. But that being what it is Meghan thankfully has skills beyond being a housewife that have managed to get her to this point and might be better served if she continues onward with her skill rather than her looks to get by. These days being a beautiful woman that can act like a spoiled child on TV is something that’s seen as rather common and in some cases cringe-worthy. But when a person has the skills that can pay the bills so to speak it seems as though their time is better spent making the best of whatever situation they choose to put themselves in. Battling it out with a bunch of self-important, spoiled housewives doesn’t seem to be the idea landscape, but obviously she made her choice.

Here are a few things you might not have known about Meghan.

10. Her husband was allegedly having an affair while she was pregnant.

Scratch the ‘allegedly’ part, he WAS having an affair while Meghan was pregnant with twins which is more than just an outrage since famous folks seem to have a bad habit at times of doing things that are ill-advised but somehow still manage to get them noticed.

9. She made her reality TV debut on Say Yes to the Dress.

Apparently she made her debut on this show while picking out a dress for her wedding to her husband, you know, the one that eventually cheated on her when she was pregnant. The funny thing about this is that she was already breaking her own rules upon getting engaged to him.

She’s still got a lot of time left before she’s seen as someone that might not have any real prospects in front of the camera, but it does seem that if she wants to stick to reality TV or TV at all it might be best to find something fictional or something a little more low-key.

7. She’s been married once before.

The first marriage lasted about four years it sounds like, but quite honestly marriage when you hit a certain tax bracket or become famous seems to be kind of a trivial thing sometimes. It’s not something that happens to everyone thankfully, but it does seem to go around.

6. Meghan broke her own rules when marrying Jim Edmonds.

She wasn’t going to marry anyone with kids, a famous athlete, or anyone that was too much older than her, and she hit the trifecta since Jim had four kids with two different wives before her, was a player for the Cincinnati Reds, and is about 15 years older than she is. It’s kind of amazing how people want specific things in the people they marry but are willing to compromise at the drop of a hat sometimes.

5. She’s closer in age to her step-daughter than she is her husband.

Jim had kids before ever meeting her and Meghan is closer in age to Jim’s eldest daughter than she is to him. This no doubt made it kind of hard to be the authority figure in the house since kids don’t always look to those who are only a handful of years older than them as authority figures. Things seemed to work out though.

4. There’s been a petition made to kick her off the Real Housewives of Orange County.

This is kind of amusing really since if anyone watching the show was going to be fully honest then they might kick the entire cast off and try again. The whole excuse of ‘they’re rich and expect a certain lifestyle’ is a very tired excuse for poor behavior even if some of it is staged. So yeah, kicking Meghan off wouldn’t have been enough, it seems like with a lot of these shows it’s time for a serious reboot.

She’s made more than just the paycheck she gets from RHOC as she’s been a businesswoman as well during her career and has proven that she’s more than the pretty face that she presents on the show. It’d be interesting to see just how many cast members, wives in truth, on the show could survive on their own if they were forced to work. It could be kind of a surprise really.

This seems like it comes with the territory between being a businesswoman and being on reality TV as she has a fan base to appease and her own life to document as she sees fit.

1. Apparently she did leave RHOC.

As it’s been said Meghan was one of the only wives on the show, perhaps THE only one, to really avoid embarrassing herself on a massive level before deciding that three seasons was enough.

At least she removed herself from the drama, that’s a plus.