Author’s Note: Sorry for the delay in the Melrose Place recap this week. I was hit with life altering events Tuesday, who I will just label ‘parents’, that I could not ignore. But here I am for the penultimate episode before Amanda Woodward’s entrance. Was it juicy? You bet your “Juicy Fruit” sweet ass it was!

It is literally the day after all hell broke loose for Auggie at Coal and Riley and Jonah’s relationship, but we pick up with Lauren staying later with a client and coming home super early, but lying as if she had just got off a shift at the hospital. While Lauren has learned how to spin her lies just as well as turning tricks, Ella still knows something is up and tells her to be careful. Meanwhile, the bedroom is a cold and lonely place for Riley and Jonah as they give polar opposites a new meaning. Crazy Violet has just received a summons for resisting arrest when the police came to talk to her. David plans on hanging out with his little brother Noah, but unbeknownst to Michael and Vanessa (guest star Brooke Burns).

Riley and Jonah’s breakfast is awkward and the two ask the short simple questions that couples as to be civil while mad, but it takes Riley to get to the elephant in the room. Jonah reveals that he wants to take a road trip to clear his mind, but Riley wants the complete opposite and wants to hang out with him more. Before the debate can go even further, they hear noises coming from outside the courtyard and run to investigate. They run into a task force that is all over the place and leading said task force is none other than Det. Rodriguez aka Buzz Killington. Rodriguez asks the couple if they had seen Auggie, because the police found the murder weapon and Auggie’s blood is all over it and is wanted for murder.

Ella’s Thing For Jonah is Revealed, But Riley’s Lost Her “Thing” For Auggie?

Ella gets an assignment from Caleb, who is either the laziest or least charismatic PR boss ever, to go and snag Franz Kappler, a potential client for WPK. Caleb was supposed to do it, but… you know. Ella, who has no interest in this meeting accepts it, but calls in Jonah to come with her and do all the movie talking while she talks publicity. Meanwhile, Jonah is beyond convinced that Auggie is Sydney’s murderer, so imagine how he feels as Riley defends Auggie profusely and even lets slip that she might know where he is located, since nobody can seem to contact him. Jonah says that despite her heart saying that she knows Auggie, in reality she doesn’t. Then Ella calls and now it’s Jonah on the defensive as Riley give him the third degree. Jonah says that he would rather spend time with himself and sees Ella’s “emergency” as a “blessing in disguise”.

Once Jonah gets to WPK, Ella fills him in on the assignment at hand. Jonah fills Ella in on the drama at the complex, which Ella strangely is affected by. Hmmm. Of course she didn’t show her concern to Jonah. When they get to Coal for the lunch date, FranzÂ can’t get enough of flirting with Ella, who is not happy about it. Jonah jumps in and claims that he and Ella are engaged and this stops Franz in his tracks.

Back at the courtyard, Riley and Violet talk about the elephant in the courtyard, this time it’s Auggie. Both girls talk about their disbelief of the situation and Violet explains Auggie’s temper the night before when he laid out Marcello. Violet also throws in that she ‘took care’ of Auggie afterwards and that they have become intimate. Ha! It was a pity lay, Violet. But Riley is slightly disturbed.

I would be, too. I mean, it’s Violet for crying out loud.

Ella, Jonah, and Franz close their lunch date and Ella takes the opportunity to plant a nice, sensual kiss on Jonah. After Franz leaves, Ella tells Jonah that she thinks he enjoyed playing her beau and that it’s been something that he has been dying to so they met. Jonah thinks Ella is drunk, but boy she’s far from it. When Ella proposes that Jonah sleep with her, Jonah is shocked to realize that Riley had been right… EPIC FAIL, Jonah!!!! Ella fights for her reasoning and talks about how Riley is too damn normal for someone like Riley. Jonah declares that the only reason he went out with Ella was because he knew that Riley trusted him. Plus, he’s appalled that Ella would not only bad mouth Riley, but that she would actually think that he would buy her offer.

I would’ve, but that’s just me.

At home, Riley IM’s Auggie, who actually responds back, but his IMs scare Riley to the point that she pulls out the police calling card and ponders what she should do. Is she doing this out of morals or out of spite? When Jonah comes home, the two talk and Riley says that Jonah was right: she doesn’t know Auggie like she thought she did and it’s not her place to decide his innocence. She calls Det. Buzz Killington to reveal Auggie’s whereabouts.

Wonder how that turns out?

Meanwhile, Caleb tells Ella that Franz signed with WPK thanks to Ella and her ‘boyfriend’ Jonah. While trying to convince Caleb that she and Jonah are not an item, Caleb throws in that the only reason Jonah would want to pretend to be Ella’s boyfriend is if he actually wanted to be her boyfriend. Ella plays off the comment, but deep down she knows she wants what the Jonah is cooking.

David waits till after Michael and Vanessa leaves and picks up Noah, courtesy of the Mancini’s housekeeper who is nervous about the situation. Meanwhile, Lauren (working on an hour and half worth of sleep) fumbles in a routine rounds checkup and Mancini berates her in private for it.

At the carnival, David and Noah have the time of their lives, but when Noah gets hurt pretty badly, David knows that he is a world of trouble. He has Lauren meet him at the hospital, but what David thought was just a nasty arm sprang is followed by a concussion.

So when the parentals show up, they are most definitely pissed. Vanessa gives David the stay away from my son speech, while Michael tells David how reckless he was acting with little Noah. I would like to point out that little Noah doesn’t want anything to do with Michael tonight. Wonder what’s up with that? Also, David explains that he only wanted to be a brother, but Michael mentions presses charges if Michael ever gets out of line again.

But the bright side in all of this? Lauren was granted “Rock Star” status for a job well done in pointing out perfectly every injury little Noah had. I would too if he was the son of my boss, but again, that’s just me.

Michael and the Violet’s Crazy Moment of the Week Returns!!!!

Remember that Violet got that summons for her sprint from the police? Well, Violet goes the distance to make sure she doesn’t have to show up to have her day in court empty-handed. How does she do that? Blackmail Michael, of course!

But it seems that she had been blackmailing him since their last encounter, and this solves the mystery of how the hell did she manage to afford an apartment like Melrose Place. She tells Michael that she needs him to get a lawyer or the video of them screwing will reach his wife’s eyes.

Later after leaving a message for Auggie (I bet it was her 20th), Violet gets a visitor in Michael, who comes bearing good news: he knows the judge proceeding over her case. The judge owes Michael a favor for saving his wife’s life. Before Violet can get happy,Â Michael tells her that he can either speak for her or against her if she doesn’t erase the vid. Violet learns her lesson to never scheme a pro-schemer and erases the message.

Crazy moment of the week? Blowing up Michael’s phone, breaking into his office and playing the video of them together on his computer. I bet she sent a copy to herself for collateral.

Everyone convenes at the pool at the end of their long day. First Violet asks Lauren if she can move in with them to save for rent. HA!!!!HAHHAHHAHHAHA!!!!!! Of course, Lauren says no, but because she doesn’t think Ella would be thrilled. Ella informs David and Lauren of Auggie being the prime suspect of Syd’s murder. Ella also apologizes to Jonah and blames it on the Goose (or rather Pinot Gingo). HA!

Then Michael shows up and everyone gets quiet. He calls David upstairs to talk. When they get there, Michael says that despite all that happened, he is pleased and glad that David wants to spend time with Noah.

David makes his way downstairs to thank Lauren for being a Rock Star. The two flirt and Lauren mentions how seeing David with Noah showed her a new side of David. After some advice from Lauren about the thefts, David tells her his thieving days are over due to Lauren’s disapproving gaze when she caught him stealing. He then moves in for a kiss, which she accepts, but can’t “accept”, if you catch my drift. She has flashes of her hooking and tells David it’s not him. David leaves a little hurt, and Lauren cries for all her lies.

So what you guys think? Again, sorry for the delayed recap, but again life happens. Hope you enjoy! 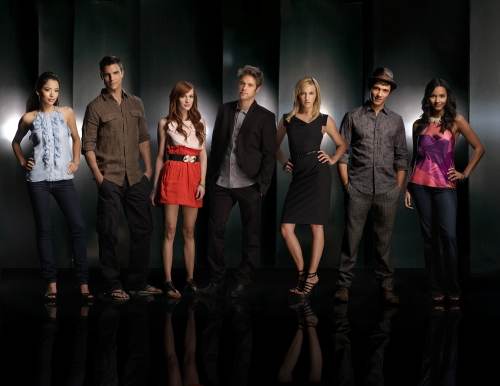 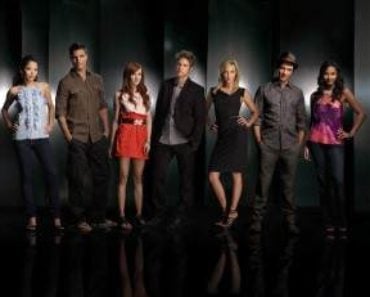 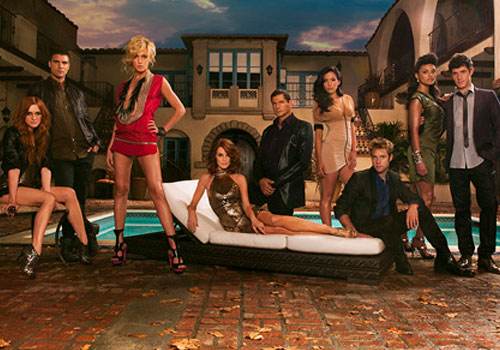 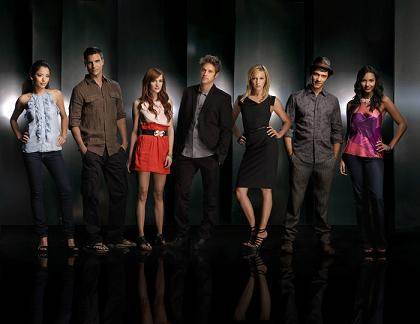 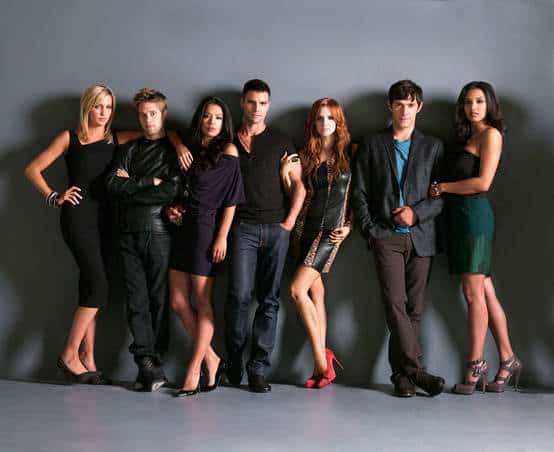