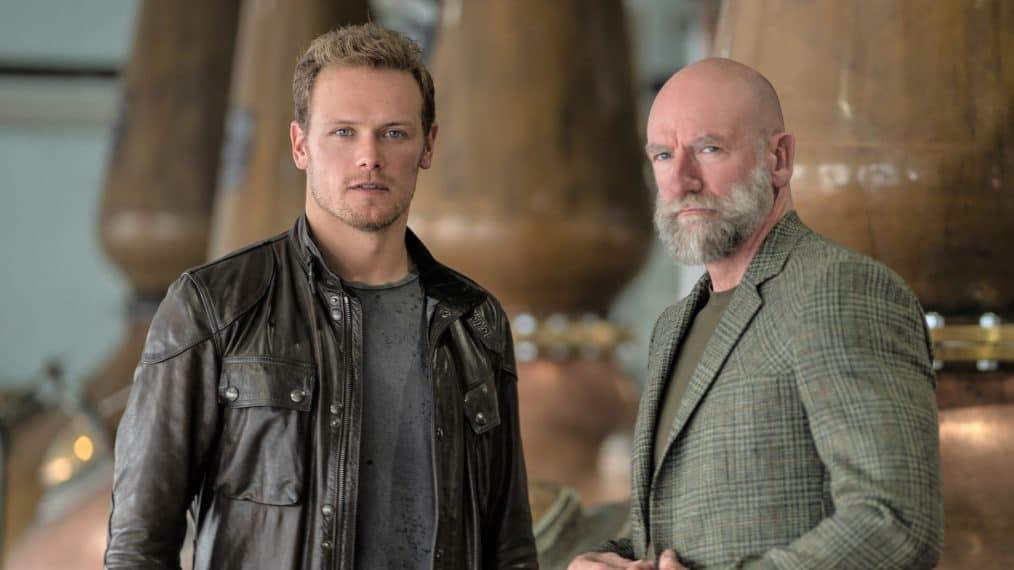 Just to let people know ahead of time if you don’t watch Outlander it’s likely that you won’t know who Sam Heughan and Graham McTavish are, but that shouldn’t be too much of an impediment when watching this show since all one really needs is an interest in Scotland and what it has to offer as far as being a half-hour show that’s determined to show a few interesting points that Scotland has to offer. The humor is a bit dry and might not suit everyone but the brief history that is given about the place and its many different wonders already looks interesting enough to keep a lot of people watching since despite being a relatively small place, Scotland does have a good deal of history that can be pulled from in order to create a worthwhile program, and Sam and Graham are just fun enough to enjoy since their chemistry is slightly awkward, but it’s enough to keep the show moving forward. This first episode was actually pretty interesting since had to do with the food and drink of Scotland, which is far more varied than a lot of people might think since one thing that people tend to associate with Scotland when it comes to food is haggis, the organs of a sheep that are cooked up inside of a sheep’s stomach and then served to those that are brave enough to eat it. For many in Scotland this actually a pretty common dish since it’s been around for so long, but their fare tends to lean towards other delicacies as well.

Given that Scotland, as a part of the UK, is smack in the middle of the Atlantic Ocean, there’s a veritable bounty of seafood that is just waiting to be harvested, but as it’s seen while the guys are out on the boat, the fishermen tend to do their part to keep things sustainable by not taking everything and tossing back anything that’s too small, or possibly anything that’s female. That last part is hard to say without knowing the fishing practices in Scotland and how their regulations and rules work, but in some parts of the world the females of any species might get tossed back to keep the population afloat. Again, don’t quote me, but that’s been something that’s happened in the past and could very easily be a common rule that’s still followed. It makes sense obviously, especially since taking everything all the time will tend to shorten the food supply as the younger specimens and females are responsible for creating future generations of their kind that will be harvested at a later date, continuing the cycle. But from the more upscale restaurant, Kitchin, to the meal the guys partake of on the dock, which looks absolutely great once it’s all done (yes I’m a bit jealous), there is a lot more to Scotland than sheep’s organs.

From the food portion of the show the guys headed on over to Laphroiag on the Isle of Islay, where they were invited to learn about the process that’s used to create some of the finest whiskey the world has ever known. To think of how much whiskey is exported from Scotland is amazing really, but for all whiskey lovers the idea of what goes into the process is just as amazing since from the peat bogs where the fuel for the furnace is taken to the distillery itself and to the final product it’s nothing short of brilliant and no doubt the dream of many whiskey enthusiasts, and perhaps just those that are interested in learning how Scotch whiskey is made. Obviously gathering the peat wouldn’t be the easiest or most desired job since it looks like something that might take a while and wear on an individual after a while. But being able to visit the distillery and find out what goes on there and how long some of the barrels have been aging is simply amazing. For many, whiskey and any other liquor is there to drink and get drunk on, but for those that appreciate it, this would be a definite treat. The mere though of what a bottle costs is enough to make a lot of people raise an eyebrow, especially since a fifth of Laphroaig can go for up to around $1,400 easily, and the brand doesn’t dip that low in comparison to many others. Oh yes, it’s the good stuff, and no, that’s not a bunch of bunk if you know your whiskey.

So far there are no kilts being shown in the first episode, but given the fact that the guys were visiting a peat bog, were out on a boat in the Atlantic, and were simply getting started, there’s plenty yet to come. As mentioned it’s a bit dry if you’re looking for nothing but humor, but it’s also interesting to learn more about the country as well.