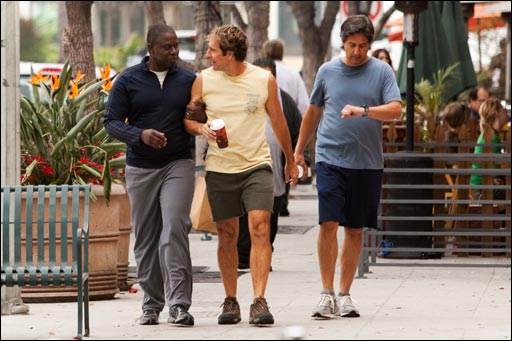 After last week’s premiere episode of Men of a Certain Age, I predicted that each character will try to take their next step in fighting through the dead end walls that they found themselves standing at. They made small steps at the end of the pilot, but are they ready for that giant leap? Let’s find out!

Terry flirts ridiculously with Annie at the coffee shop while Owen and Joe watch. Once outside, the guys tease Terry for practically robbing the cradle (he’s 49, Annie is 25). While Terry defends himself, he is nearly ran over by a black SUV. Terry catches up to the vehicle, but the person (who looks like a typical Hollywood prick) continues to drive with no care in the world. Joe tries to take a pic with his phone of the SUV’s license plate, but he instead takes a pic of himself and Owen, who complains that no one told him that his jacket was too tight. HA!

Later, Joe has breakfast with his kids at the hotel diner and the kids notice that Joe has made the place kinda like his home. Lucy asks if he will ever get his own place, not in a snot way, but in a more concerned tone. Joe dances around the question, saying that he wants to, but he wants to make sure that he doesn’t have to. In short, Joe thinks he’s coming home soon. Then Sonia (special guest star Penelope Ann Miller) comes to pick up the kids for school. Joe tries to make small talk with her, but it flies over Sonia’s head. It is clear that they are civil, but not the best of friends as Joe has been claiming.

Owen comes to work only to have his father pull him out of his car to sell it to some customers. Owen Sr. says that Owen is regulated to lower demos until his numbers come up. But Marcus drives on the lot in an expensive sports car, teases Owen for now driving a hybrid, and drives off. I thought hybrids were cool?

At the party supply store, Joe looks at apartment books and gets on DeShaun for listening to his iPod while working. Then the Fantasy Woman comes in looking for balloons and she recognizes Joe from the hiking trail. He fumbles over his words and kind of messes up the moment. Even DeShaun says that it was disaster. Later at the hotel diner, Joe reads the sports paper and is asked by the waiter if he plans on betting on an upcoming game. Joe says that he is not a gambler anymore. Uh huh. The waiter also fills Joe in on a going away party for another long term guest, and since he figured that Joe is a “lifer” at the hotel that he would want to join the festivities. Joe claims that he’s not a lifer (he has only been at the hotel for a couple of months) and says that he will come, but then Joe starts to over analyze about what to bring to the party and all I can do is shake my head…

At his job, Terry tries to look for the guy who nearly swiped him. Steve, the geeky coworker/wannabe actor, offers to have his police officer brother run the plates for Terry so they can put a beatdown on the culprit. I doubt Terry wants to do anything with Steve, but he thanks the guy nonetheless for the help. Dave, the supervisor, steps into the convo about how his cable guy was a jerk for not giving him free HBO. Poor Terry…

Owen comes home with the hyrbid car and no one is happy to see it, especially Melissa. But there is a bright light for Owen. A new 35-42 inch plasma screen HDTV sits in his living room and he is overjoyed that something is working in his house. But Melissa can’t take her eyes off of the eyesore outside in their garage. 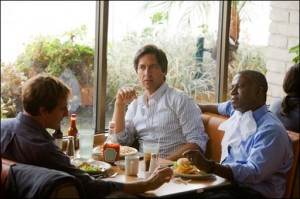 It’s lunchtime at Norm’s and Joe talks about the Fantasy Woman and his erection, then the convo switches (Thank GOD!) to Terry finding the guy who nearly sent him to an early grave. The other two don’t see what the point is in facing the guy, who Terry feels should be dealt with properly. Joe and Owen, mostly Owen, declare that they can’t be bothered with Terry’s shenanigans and that he should just let the incident go.

Melissa arrives at the dealership to bring Owen lunch, but she has an ulterior motive. She stops by Owen Sr.’s office and asks him about the hybrid and did he not think about Owen’s family when subjecting Owen to that rabbit box of a car. Owen Sr. ‘sternly’ explains that until Owen’s sales go up then he has to drive a lower demo and that he will not show favoritism to his son. Melissa says that she didn’t suggest that, but she knows that a bigger car for Owen would not bring the dealership down. Owen Sr. surmises that Melissa doesn’t understand business, but Melissa smells “petty bullsh*t” and calls Owen Sr. out on it. The two get into a huge argument that is heard throughout the entire dealership. Melissa storms out of the place and runs into Owen, who is perplexed about what is going on. Later,Owen returns home where Melissa waits for him to snap. He doesn’t necessarily, but he does tell her that she can’t do what she did today ever again. He explains that people at the dealership already think that he got the job due to him being the owner’s son, and to have his wife come and defend him will take away the only pride that he has left. Melissa apologizes.

Joe arrives at the party after settling to bring a six pack of beer. He clearly feels extremely awkward. He eventually starts to blend in 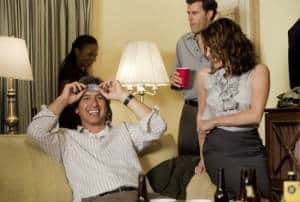 and join in on the festivities, with a woman named Michelle, who later gets hot and bothered and comes on to Joe. They eventually make out, but Joe stops it and makes up an excuse of having to pick up his kids, then leaves the party.

Meanwhile, Terry and Steve sit outside SUV guy’s house and when they see who he is, Steve is ready to pounce, but Terry tells him to chill out and wait. But is Terry finally realizing to ‘let it go’? Steve berates Terry for not wanting to do anything after going through all that trouble to find the guy’s address. Terry lets Steve build his head up and goes to confront the guy. He knocks on the door and is met with the guy’s wife. The guy then shows up holding his daughter, which throws Terry off his game. Turns out that the guy didn’t realize what had happened, but he apologizes. The guy then gets freaked out when Terry doesn’t leave and threatens to call the police, leaving Terry looking stupid.

…The More They Stay The Same

Joe stops by Sonia’s to pick up the kids and while he’s there, he asks her what is the deal with them. Sonia asks if he met someone, but Joe declares that he didn’t. He just wants to know if there is anything left. Sonia then suggests that they see other people. I can basically hear Joe’s heartbreak in a million pieces.

Owen overhears Owen Sr. belittling Melissa to another employee. He approaches his father and apologizes for Melissa’s behavior, but not for what Melissa said. He continues to tell Owen Sr. that his “meritocracy” is a sham since another employee sold less cars and is not driving the worst car on the lot. He finishes with saying that it’s not favoritism that Owen Sr. is showing, but the opposite… which I can’t repeat here.

At the party store, Joe spots Burt in the store and immediately brings him in the back. He pays Burt and asks that he don’t come around during the day. Joe then makes a bet on the basketball game and bets pretty dang high: $2000 over (I don’t know what that means… so forgive me…).

Terry stops by the coffee shop again and is almost ran over again by a car. This time Terry throws a cup of joe on the car and a beefy weightlifter steps out. Terry stops in his tracks and when the guy comes after him, Terry jumps into the guy’s car and drives off with it. Terry then stops the car and parks it on the side of a road and throws the keys away when he sees Claude still behind him. Terry then runs off. 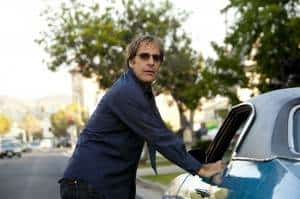 Owen comes to work and is met by Owen Sr., who asks for the keys to the hybrid and tells Owen to pick any car off the lot to drive. Owen decides to pick Marcus’s car, to piss Marcus off. He tells Melissa that he will get something bigger the next day.

Did the guys make a break through that brick wall? Let’s see…

Everyone meets up at Owen’s to watch the game on Owen’s new TV. When a basketball player makes a nice dunk, Owen stops the game to see the play in slow-mo. Joe becomes agitated and the guys immediately know that Joe is gambling again. Joe denies it and when the guys keep chastising him, he declares that he is a grown man and can do what he wants. The guys remind Joe that his marriage is in shambles because of his gambling habit and that he will not have a chance in hell to reconcile with Sonia if he continues it. This statement prompts Joe to reveal that Sonia wants to see other people and that he has already moved on. Exaggerate much? The guys become interested and Joe mentions kissing Michelle. The guys congratulate him and they call a truce for the moment. Joe then wants to get back to the game, which has the player shoot a three pointer at the buzzer, putting the game into overtime. Joe jumps up, ecstatic and then proceeds to beat the crap out of Owen’s son’s Hulk balloon. Pent up frustration would be an understatement. Joe apologizes to the guys and tells them he will see them later. After Joe leaves, the guys look on. Owen then asks Terry if he drove Joe there and Terry says yes. The doorbell rings.

– Joe faced the facts that his marriage is pretty much done, but now that he is single, I am kinda scared for the guy. He is a disaster waiting to happen and I will be tuning in for every moment.

– Owen finally stood up to his father and called the dude out on some BS. But as much as I agree with Owen on Melissa going to the dealership, it was one of the best scenes of the night. I would be mad too if my wife did that, but I sure as hell would laugh about it afterwards.

– At first I felt that Terry’s storyline was kind of lame, but the ending made up for it, because I also hate it when people run over you and don’t see the problem in their actions. I wouldn’t have went as far as Terry did, but still.