Newsflash: Middle aged men are in. Now I feel safe admitting I’m over 40. Ray Romano’s Men of a Certain Age, a series I personally dismissed as demographically narrow but brilliant, seized the top spot in ad-supported cable premieres this year with a whopping 5.4 million viewers. Now, the segmentation shows what one would reasonably expect: almost half of those viewers fit in the 25-54 age range. Yup, and you can bet that two other statistics aren’t going to be discussed, despite the huge overall number: the concentration of males, and the concentration in the upper end of that spread. But really, who cares – middle aged men need TV shows too.

Men of a Certain Age stars Romano, Andre Braugher, and Scott Bakula as a tight knit trio of friends dealing with advancing age and all the typically amusing ways we males tend to resist it. The humor is un-apologetically targeted to the over the 30 male demo, but is just as watchable for people who have no idea what being male, or old, is all about. Trust me… if you are not a “Man of a Certain Age” you will get it. 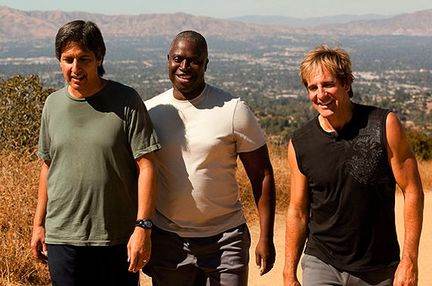 After receiving strong reviews from critics across the country, TNT’s MEN OF A CERTAIN AGE proved equally popular with viewers Monday night. More than 5.4 million viewers tuned in for the 10 p.m. (ET/PT) premiere of the series, which ranked as ad-supported cable’s top new series launch of 2009 among households (4.1 million) and adults 25-54 (2.6 million). Among key adult demos, MEN OF A CERTAIN AGE delivered strong growth over its lead-in, a new episode of THE CLOSER.

‘The response from viewers and critics to MEN OF A CERTAIN AGE has been amazing,’said Michael Wright, executive vice president, head of programming for TNT, TBS and Turner Classic Movies (TCM). ‘I’m proud of everyone involved with this wonderful series, especially its creators, Ray Romano and Mike Royce, and the great cast headed by Ray, Andre Braugher and Scott Bakula.’

MEN OF A CERTAIN AGE explores the unique bonds of male friendship among three men approaching mid-life. Now in their 40s, they have been best friends since college, but they’re finding that life is indeed, as John Lennon once said, ‘what happens when you’re making other plans.’

The show focuses on Joe (Romano), a friendly, 40-something, slightly neurotic, recently separated father of two who had dreams of being a professional golfer but instead owns and runs a party store. He has two best friends: Owen (Braugher), an overstressed husband and father who is a car salesman at his dad’s dealership; and Terry (Bakula), an offbeat, handsome, intelligent and still-struggling-to-make-it actor. Romano and Royce serve as executive producers with Rory Rosegarten and Cary Hoffman.