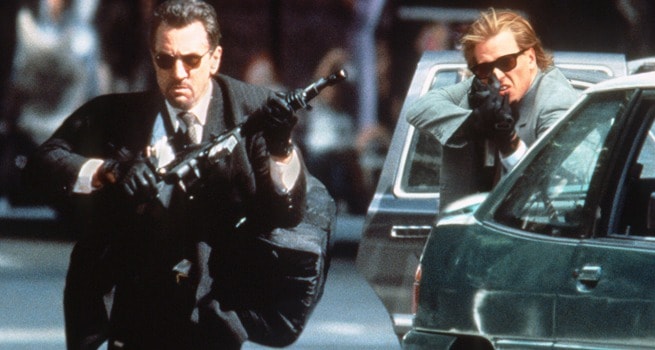 Had Michael Mann decided to make a prequel of Heat decades ago, perhaps only a couple of years after the original was brought out, it might have worked. Kilmer, De Niro, and Pacino would have still been in decent enough shape to make it work. But as with all things, timing is everything and there’s nothing to say that it wouldn’t have been an ill-timed attempt as well. There were thoughts of a sequel as well, though how this could have been is kind of hard to imagine since De Niro’s character was dead by the end and Kilmer’s was the only one that survived. It’d be hard to think that Chris went and found a new crew and thought that he could pull the same heists as his deceased associate, especially without knowing whether or not he could trust his crew. A prequel though would be kind of interesting, but as Kevin Fraser of Joblo mentions it would need new actors that could play the roles passably well if not perfectly. The de-aging software that so many think is working so wonderfully, and has in some respects, didn’t do a lot of justice to De Niro in The Irishman since comparing what he looked like when he was younger versus The Irishman made it kind of laughable to think that people actually believed that the two were anything alike.

It could be interesting to see a prequel to find out just what brought the crew together and how many jobs they’d taken on. It might also be intriguing to find out more about Pacino’s character and how he came to have three failed marriages, even if a lot of people might feel the need to chime in with the simplicity of it. Whether or not the ten-inch stack of paper on Mann’s desk, as he’s claimed, will ever see the inside of a studio is difficult to say since without any real time line when it comes to studios reopening it’s almost impossible to state whether or not this will be a solid idea when people get back to work. There are a lot of plans being laid at the moment, a lot of ideas that are up in the air and buzzing around the ol’ rumor mill that a lot of people are wondering about, but some days they’re looking more like fat, bloated things that are in danger of crashing back down to earth as the studios continue to remain closed. That sounds a bit depressing I know but at the same time there are plenty of ideas that took off with a hope and a prayer and might be coming back down for a rough landing eventually as they’re either not that well thought out or they just don’t make that much sense to begin with. A Heat prequel does make some sense considering that the movie has endured the passage of time fairly well and is still entertaining enough to talk about. Jon Fuge of MovieWeb has more to say on the matter.

The movie is also one of the few times that fans got to see Pacino and De Niro on the same screen in the same shot together, and it was great. Two of the biggest stars in the world, two very strong-willed individuals, who both dominate the screen when they’re on, being put together was something special since it hadn’t been done before, at least not with these two. That unfortunately is why a prequel might not work the same way as the original since with the de-aging technology it would be kind of a bad joke considering that it wouldn’t de-age the two men that much, not enough at least. Miles Surrey of The Ringer has more to say about this. Plus, someone would have to come in for Kilmer, Tom Sizemore, Danny Trejo, and the others since the gathering of the crew would need to include these figures considering that they were there when the original movie was underway. Finding a killer cast that would be able to pull this off would be something that might take a while, especially since a lot of people would want to put their two cents in and claim that this or that actor would be the best for the role. In other words casting would be a mess for a while unless luck managed to shine on the casting director in the form of those that could fit the roles without too much coaching and without sounding as though they were trying to overdo it.

So in a sense, yes, this would be a decent idea if only to help explain the movie a little better since to be fair it does just jump into the action and expects people to follow along, which is all well and good since too too much explanation would have slowed it down and possibly killed it. But a prequel at this time could go a long way if it was done right.