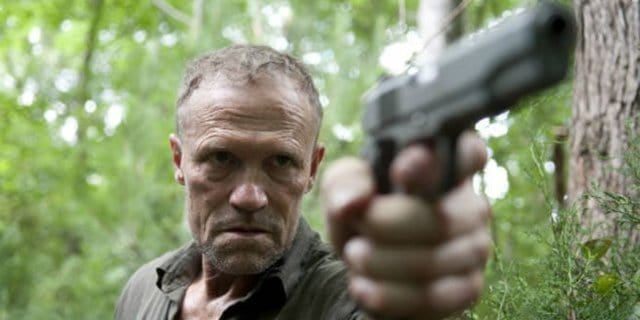 There was a time when Michael Rooker was still famous but wasn’t quite as well known as he is now. He’s always been a good actor and if you need a reminder he’s been around for a good long while. But as John Fuge of MovieWeb has written he’s showing up just about everywhere now and it’s nothing less than awesome since he’s got the skill and the experience that’s capable of bringing just about any movie up a notch. From his time on TV to the many movies he’s done Rooker has been great since he’s almost always the gruff type that is either friendly and yet still capable of a full-on, throaty growl when it’s needed, or is one of the most despicable bad guys you’ll ever meet. Yes, if you’re thinking of Merle from The Walking Dead at this point or even Yondu from Guardians of the Galaxy then you’ll know he’s fully capable of playing the in-between character as well, someone that is out for his own self-interests but can be swayed by either side. Some folks might call those kind of characters a bit flaky when it comes to morality, but in a more practical light they’re the type that mean to survive by any means necessary, and tend to eschew words like honor, dignity, integrity, and even karma for a few more added moments in the world. Rooker is exceptional at playing such characters, but upon meeting him a lot of people have stated that he’s a genuinely fun and engaging person.

The news now is that he’ll be starring in the next Fast and Furious movie that will be seeing a lot of the main stars return but will be missing Dwayne Johnson. He’s also been rumored to be starring in Suicide Squad 2, though he has vehemently denied this. A lot of people are still willing to bet that he might have something to do with it, but there are no reports as of yet as to whether this is substantiated or not. Fans are going to say whatever they have to say but until we know for certain there’s nothing really TO say so let’s stay on track as much as we can. Rooker has been killing it for a while now and he’s actually been doing pretty well at his job for a long time. The only difference is, as it would seem, is that he’s becoming far more pronounced when it comes to his role than he ever did in the past. As Yondu and Merle he’s seen quite a bit of fame, but over the years his roles in movies have either been bit parts, cameos, or other small or supporting roles that have him front and center a lot of times but still don’t focus on him as much as other actors for various reasons.

A good example would be the recently released movie Brightburn, in which he plays a rather eccentric journalist warning people of the several super-powered beings that are currently terrorizing the world and making it unsafe for regular people to exist. Apart from that his roles have either been big or hard to notice since he pops in at times and then is gone. Having him on TWD was an absolute joy since the character of Merle was an ass through and through, but he still had a couple of redeeming qualities since he wasn’t wholly evil like the Governor or a few other individuals. But in the movies Rooker is so on point that putting him back on TV almost feels as though he needed a break and decided to lay a bit lower for a while. On the big screen he’s great since his personality and his ability to act are so insane and intense that he belongs there without any doubt. It’s hard to say just where he’ll fit in with the Fast and Furious crowd, but given that the lot of them are starting to age you can at least imagine that he won’t be too out of place. They’ve had Kurt Russell along with the group for crying out loud, and he’s definitely not a young buck anymore. But what capacity we’ll see Rooker in is still kind of up in the air since as a bad guy he’s simply horrible and great at the same time since he can play the part so well. As a good guy he’s still great but he’s the kind of character, usually, that you might see as a good friend but someone that’s still going to call you out for anything that he might see as less than satisfactory in a relationship.

In other words Rooker is a well-rounded individual and is a real asset to just about any movie he’s put into, and at the moment his career is on a definite uptick.