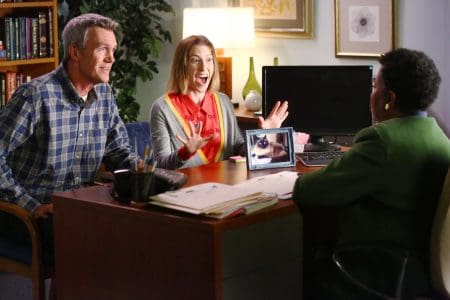 Honestly this was the most stressful The Middle has ever been. Everyone was frustrated with each other but fortunately all their problems were resolved in various ways.

Sue’s life was going too well to be true. She just had the best summer of her life in Dollywood and she was happy as can be. So of course, a mistake she made back in March to ignore an email reminder about renewing her financial aid for the following year would come back to haunt her. She’s effectively kicked out of college due to failure of tuition payment.

Mike pulls through in the end by secretly paying for the whole year. In order to do so though, he had to sell his half of the diaper company he started with Rusty. It was well worth it for Sue, and the way he said that at the end definitely made me tear up. I really thought he was going to tell Frankie he had to take out a dreaded student loan instead. Now that would have been the most realistic answer to this sort of problem.

If any Heck should be worried about being kicked out of school, it should be Axl. He made a habit of taking his and Hutch’s Winnebago back to Orson almost everyday to see April. Doesn’t he still have his own car though or am I forgetting something? Anyway, Hutch feels neglected by his best friend and voices that concern. They hug it out in the manliest way possible on the football field.

Which of the storylines had you the most stressed out?

The Middle Season 8 Episode 2 Review: A Tough Pill to Swallow

Tensions are high on The Middle when Sue mistakenly gets kicked out of college and Brick refuses to swallow pills.