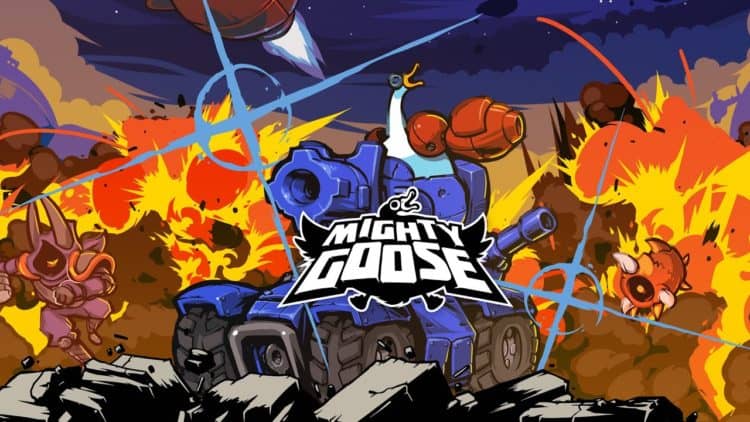 Okay, I get that this headline has a lot of ‘M’s, but I promise that it’s only going to get more majestic from here on out. (I’m sorry, I like alliteration!) You might be asking to yourself, what is Mighty Goose? Well, Mighty Goose is a game that has been developed by Blastmode and MP2 Games and published by Playism and Active Gaming Media. It is a “fast paced run & gun shooter starring a bounty hunter Goose.” Yes, you heard that right: a bounty hunter Goose. In Mighty Goose, you play as Mighty Goose, a bounty hunting bird that has been tasked to complete a variety of objectives on different planets, all while attempting to stay alive. I got a chance to play Mighty Goose on the Nintendo Switch and I’m here to tell you all about what I thought of the game! While the story isn’t really a huge part of the game, there will be minor spoilers throughout this review, so keep that in mind before reading if you care at all about spoilers.

Mighty Goose is not a story driven game by any means. There is a bit of a narrative in the fact that Mighty Goose is attempting to take down the Void King, which ultimately leads you to the final boss battle where you inevitably fight the Void King, after which a portal opens and sucks it into another dimension. Throughout the game you’ll meet a few different companions like Regular Duck, Commander Vark, Knabbo, MetalWheel, and Raven (previously your enemy, but now your friend), all of which are able to be brought along on your missions and each companion brings with them their own abilities that will help you in almost any situation. You’ll meet each of these companions as you progress through the game, so if you want to unlock Raven, you’ll need to reach about 50% completion before you are able to bring him along on your missions.

While typically not something which you’d think to judge a game that isn’t centered around music, the soundtrack for Mighty Goose adds a pretty interesting element to the game, and I am quite a fan of it. The soundtrack features “crunchy synth-rock and funky jazz-fusion progressions” all of which are composed by Dominic Ninmark, who has previously composed music for Moonrider, Blazing Chrome, and Gravity Circuit. Mighty Goose has such an entrancing soundtrack that even while I’m sat here writing this review, I’m listening to the lobby music, because it’s just so good.

Where Mighty Goose truly shines is its gameplay style. Mighty Goose offers a wide variety of weaponry and war-machine vehicles that allow you to wreak havoc on any enemy that has the misfortune to come across your path. From the likes of shotguns, machine guns, rocket launchers, and tesla cannons, you have so many options to choose from (personally, my favorite is the shotgun). At the end of almost every mission, there will be a boss that you’ll have to fight and many of these bosses are there to test your skill, timing, and dodging, as well as your ability to process several different things at one time. These bosses fill nearly your entire screen and there is a lot going on in a vast majority of them, so you’ll need to be fully prepared going into these boss fights. There’s something about Mighty Goose’s side-scrolling gameplay that’s just entirely satisfying to me; the enemies go down easily, so you don’t feel like you’re dumping all of your ammunition into a single enemy, (but you can very quickly get swarmed by large groups of small enemies, so you do have to manage your space), and the bosses have mechanics that are quick to identify and easy enough to manage once you’ve got a hang of them. While you’re not going to be getting an absolutely impossible challenge in this game, there’s still enough to make it feel rewarding when you beat a boss, but not hard enough to make you want to stop playing. Mighty Goose is a fairly quick game, I beat the main part of the game in a little under 2 hours, but there is still post-credit content to play afterwards, so you’ll still have plenty to do.

I have to say, while there isn’t really much of a narrative to Mighty Goose, I do quite enjoy roaming the various planets and bringing endless destruction, all while honking away to taunt my enemies. I do hope that Blastmode adds a horde mode or even a boss rush to Mighty Goose eventually, because I think that would provide an endless gameplay loop and would satisfy any player for hours on end, though maybe that might be something to think about for Mighty Goose 2? Mighty Goose is available on Nintendo Switch, Steam, Xbox, and PlayStation for $19.99; if you’re looking for a fun time killer, I would definitely suggest picking it up!