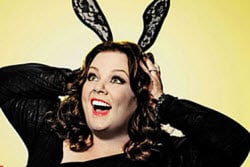 New York Observer critic Rex Reed made headlines a few weeks back when reviewing Melissa McCarthy’s movie, Identity Thief. He described her as “tractor-sized,” and the Mike and Molly star has remained silent on the insult until now, speaking to the New York Times.

Reed’s extended on McCarthy reads: “a gimmick comedian who has devoted her short career to being obese and obnoxious with equal success.”

McCarthy finally found the words to respond to Reed, and is taking the high road as anyone who knows her might expect.

“I felt really bad for someone who is swimming in so much hate. I just thought, that’s someone who’s in a really bad spot, and I am in such a happy spot. I laugh my head off every day with my husband and my kids who are mooning me and singing me songs.”

McCarthy said that if she read this when she was younger “it may have crushed me,” and now Reed’s comment ‘”just add to all those younger girls, that are not in a place in their life where they can say, ‘That doesn’t reflect on me.”

It’s obvious that McCarthy is a larger woman, but Reed was unnecessarily vicious and cruel about it. Critiquing anyone’s weight in Hollywood these days is a way to lose you a lot of friends rather quickly, and now this criticism is forever attached to Reed’s name.

McCarthy is looking for another Emmy for Mike and Molly, and her film with Sandra Bullock, The Heat, comes out this month.