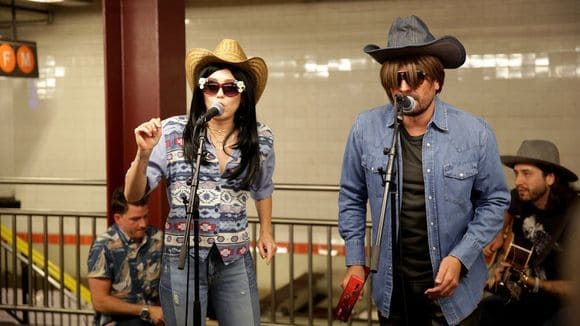 Miley Cyrus has begun her Tonight Show takeover and what better way than to do it in disguise?Â  Instead of hanging out on the beaches of Malibu, Cyrus traded in a bathing suit and short locks for a country outfit, long brown hair and the underground of the Mass Transit Authority in New York. As part of her Tonight Show takeover Wednesday – which included dancing in Hashtag the Panda’s suit and belting out tunes for the game “Google Translate Songs” – the entertainer performed on a platform below Rockefeller Center.

For the segment, the duo hoped to maintain anonymity using disguises, but Cyrus still looked pretty obvious donning a brunette wig, sunglasses and straw cowboy hat. Crowds quickly gathered on the platform to watch Cyrus and her partner perform Jolene. After finishing the Dolly Parton tune, the two revealed their identities and had a big ol’ Party In The U.S.A., performing Cyrus’ hit released in 2009.