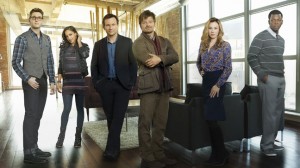 Do you need something sorted out in your personal life? Are you not where you want to be right now? Who would you turn to for help to solve your problems and point you in the right direction?

Clark (Steve Zahn) and Ross (Christian Slater) Edwards are brothers and partners in a unique agency committed to solving clients’ problems using the hard science of psychological manipulation. Clark is a former professor and a world-renowned expert in the field of human behavior. But he has a checkered history due to bipolar disorder, which sometimes results in quirky, manic episodes. Older brother Ross is a slick con man who has spent time in prison. Each in their own way knows what makes people tick. Drawing from the most cutting edge research in psychology, they can a tailor a plan to influence any situation. It’s a little bit science, a little bit con artistry, plus a smattering of Jedi mind tricks. The brothers, along with their team of master manipulators, are offering clients an alternative to fate.

Will you be watching Mind Games? How does the trailer make the show look? Where on the schedule do you think it should air?