Home
Supernatural
Mini Recap – Supernatural 4.03 “Free to Be You and Me” 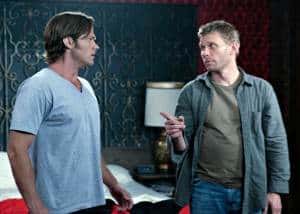 Last week, Sam and Dean broke up the band, right? This week… the band’s still broken up. And these guys seriously need to put on their Big Girl Panties and man up so they can stop the Apocalypse, damn it! I’m over the Angst — let’s get these guys back together so they can kick ass and take names. But we’re not quite there yet.

This week, Sam and his Ginormous Shoulders wake up shirtlessly (that’s a word, shuddup) in a hotel room not quite alone. Jess (Adrianne Palicki) is hanging out on his bed, complete with White Nightgown of Doooom. With no mention of why the hell she was standing on that streetcorner at the end of ‘Bloody Mary’ (thanks, Kripke… jeeze), she proceeds to lay the guilt trip on Sam by telling him that whatever he’s feeling is deep down inside of him and he can’t change who he is. Oh. And he got her killed. Pretty much nothing new. And then she disappears, leaving a tear-streaked, shirtless Sammy in her wake.

So Sam, of course, does what any logical person would do in his situation — he burns his fake IDs and gets hired as a barback under the alias of “Keith.” His boss is a terribly annoying blonde named Lindsey who’s a recovering addict herself and won’t shut up about it. (My cable kept cutting out during their scenes, for whatever reason. I think the TV Gods were trying to tell me something.) Sam gets in touch with Bobby because he’s seeing Revelations omens, and Bobby manages to send three hunters to take Sam’s place, though they’re more than a little pissed that Sam’s just sitting around with his thumbs up his ass when he’s perfectly capable of taking care of this stuff on his own. I think I agree. They come back later in bad shape — turns out they got jumped by some demons and one of them got killed. The Head Hunter pulls out a vial of demon blood and, after a pretty epic barfight, shoves it down Sam’s throat so he’ll go take out the demons that roughed them up. Just when it looks like Sam’s fallen off the wagon again, he spits the blood out in the Head Hunter’s face and proceeds to kick their asses until they leave. Lindsey, who was dragged in as a hostage, looks horrified. Guess Sammy’s gonna have to find a new job.

Dean, meanwhile, is having a grand ol’ time. There’s actually a montage early on to Skynard’s “Simple Man” that parallels Sam and Dean’s actions as they settle into their separate lives. I thought it was a little heavy handed to begin with, but as far as music montages go in this show, it was pretty kickass. I’m just satisfied with a little classic rock every now and then. Dean’s hunting on his own until Castiel corners Dean in his motel bathroom (it sounds like a bad piece of fanfiction, I know, I know). Castiel can’t find God, but he does have intel on Raphael, the Teenage Mutant Ninja Archangel. So Dean and Castiel go on a quest to trap and interrogate him. Dean takes Castiel on his first fact-finding mission as a fake FBI agent, and Castiel is terribly awkward about it, but at least it’s a little funny. They track down Raphael’s empty vessel at a mental institute, a former mechanic who’s looking pretty rough. Which I guess explains why Dean was so adamant to reject his vessel-ship during the premiere. Castiel tells Dean he’s got a ritual to trap Raphael, but it will probably kill him. So Dean does what any good friend would do in this situation: he takes Castiel to a whorehouse. It’s awkward and cringeworthy and Castiel ends up pissing off a hooker named Chastity because he said something about her dad (insert eyeroll here) and they have to run out of the whorehouse. Dean laughs that it’s been a long time since he “left that hard.” Haha. Funny, Kripke. Does this mean Dean has ED?

So Dean and Castiel set up the ritual in the mechanic’s hospital room and Castiel activates a Holy Hotline between the Vessel and Raphael by muttering Angelic Tongue (it’s not as dirty as it sounds) in the Vessel’s ear. He lights the Circle of Holy Oil on fire and… nothing happens. But wait! It was all a ruse. Castiel and Dean return to the house they’re squatting in and the Teenage Mutant Ninja Archangel is there! And he’s kind of pissed. Except Castiel and Dean figured he was coming and they set a trap! Oh my god I didn’t see that coming! Or not. Raphael tells them that God is Dead and somewhere in former Prussia, Neitzsche’s corpse is crying. Raphael says that the angels are just tired and they want all the suffering to be over so it can be Paradise. He also implies that it was Lucifer who brought Castiel the Rebellious Angel back, not God and promises to hunt him down. Castiel tells him: “Maybe… but today, you’re my little” and leaves him there in the Ring of Fire. Misha Collins’s delivery is spot on and it’s awesome. Later, in the Impala, Dean hits the viewer over the head with the ANVIL of God = John Winchester (because everyone told him John was dead, but he kept looking, blah blah blah don’t tarnish my memory of Season 1, damn it!). And then he LIES that he’s better off without Sam. He’s happy! And he’s okay with being alone! Except when Castiel flaps away and Dean’s confronted with an empty passenger seat, his eyes are like, “I’m not even buying my own bull anymore.”

Which brings us to the zinger in an otherwise unremarkable episode: Sam’s back in his room, with his shirt on, unfortunately, and Jess joins him again. He gets all teary and says he loves her and misses her, but she’s wrong. People can change. There’s reason for hope. She says there isn’t and he asks how she can be so sure and OMG SHE CHANGES INTO MARK PELLIGRINO/LUCIFER! and is all, “Because you freed me.” And I’m like HOLY…. and Sam’s like WHAT THE HELL? Lucifer apologizes and explains that his current vessel is about to burst, and that’s because he was Plan B. Sam was Plan A. Yes, kiddies. Sam is Lucifer’s True Vessel. We go through the same consent business that we heard from Dean in the premiere. Lucifer expresses his regret for the situation that Sam’s been put in, but it had to be him. It always had to be him. And then he disappears and DUN DUN DUN. Hey, at least we didn’t end up with the boys crying to each other over the Impala/Beer/Hoagie Rolls this week, right?

So, another generally lackluster epsidoe — the Lindsey character was heavy-handed, and I don’t think the God/John Winchester metaphor was very well developed, but Castiel and Dean’s adventures were kinda fun. I’m still not sure about this whole business with Sam being Lucifer’s vessel — I feel like I should have seen it coming, but it still feels off. I guess we’ll have to see how this plays out.