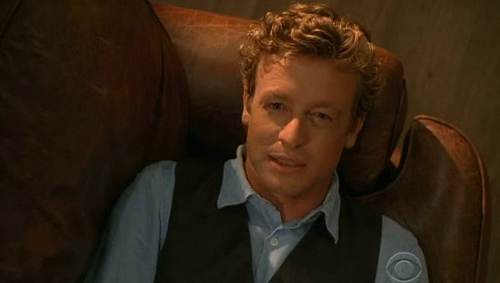 What better way to show the irreverent nature of Patrick Jane (Simon Baker) than to start off The Mentalist “The Scarlet Letter” with a yawn. Apparently sleeping through Lisbon’s (Robin Tunney) briefing in the car, Jane awakens to find the CBI team on a bridge in Sacramento. He’s quickly briefed by Cho (Tim Kang) and Rigsby (Owain Yeoman) that a state senator’s aide named Kristin Marley has been found dead underneath the bridge. Since she was rumored to be having an affair with the senator’s husband, it’s not clear at first whether it’s a suicide or murder.

Throughout the investigation, Jane and the CBI team find out several things about Kristin’s personal life. First, that her step-brother was trying to force her into being his alibi for a car-jacking. Second, that she was a romantic who dreamed about being a senator and traveling to far-off places. She collected mementos from her travels, and Jane correctly suspected she was having a secret affair.

Jane has three unsettling moments in “The Scarlet Letter”. A janitor moves Jane’s leather “thinking couch” to change a light bulb, and Jane isn’t happy until they both move it back. Next, Jane guesses that Kristin’s secret lover will be revealed by a memento hidden in a secret compartment of her jewelry box. Van Pelt (Amanda Righetti) finds the secret drawer, but there’s nothing in it. Lastly, Jane once again has a run-in with Agent Bosco, who has new evidence in the Red John case that he refuses to share with Jane. Jane plays it cool, but he’s not happy that Bosco has discovered that he’s been trying to hack his passwords and gain information secretly.

While the CBI arrest the step-brother, who has Kristin’s missing shoe in his trunk, Jane continues to follow his own path. The senator and her husband seem nervous when Jane starts collecting Kristin’s belongings from her desk. Jane also interviews the senator’s father, and gets an unspoken acknowledgment that he was having an affair with the intern Kristin.

Lisbon holds off on processing the step-brother, backing Jane up on his hunch. Jane sets a trap, leaving Lisbon a voice mail stating he has incriminating evidence and that he’s leaving it in her top desk drawer. Later that night, the same janitor that moved Jane’s couch is caught with his hand in the cookie jar. Lisbon keeps him at gunpoint while Jane tries to get information out of him, to discover who he’s working for. Jane had guessed correctly that the office had been bugged, and that the janitor–a “fixer”–had planted the shoe and stolen the evidence from the jewelry box.

The fixer feigns distress at the thought of covering up a murder, but in a quick move, he’s got Jane as a hostage with a letter opener to his throat. Lisbon is forced to drop her weapon and handcuff herself to the door, but the fixer is then forced to run when a security guard shows up. Lisbon sends a reluctant Jane out to see where he’s headed, and Jane nearly gets run over by the criminal. The fixer bolts into traffic and collides with another car, and it’s clear he’s seriously injured.

The next scene is of the bandaged-up fixer in an interrogation room, being interviewed by Rigsby and Cho. Lisbon and Jane bring in the senator, her husband, and her father. Jane shows them the silent video of the interrogation, and lets them know that the fixer is talking, and anyone who wants out of jail time needs to speak up. The senator and her father try to leave, but the husband quickly steps up. It’s clear it’s all over, and eventually the full story unfolds.

The intern Kristin was actually having a love affair with the senator herself, Melinda. The senator’s husband was just a paid escort to hide her true sexuality. Worried that his daughter was jeopardizing her career, Melinda’s father slept with the intern to prove to her that Kristin was just having a lark. Melinda felt so angry and betrayed that she went to Kristin’s apartment and ended up killing her in a rage. She called her father, who hired the fixer to try and cover it all up.

At that moment, Jane let the guys know they could let the fixer go–who then slumped forward on the table. He was dead the whole time, and they used the body to fool the senator. CBI boss Minelli (Gregory Itzin) wasn’t thrilled with the rule-bending, but Lisbon stood her ground. Pleased with another case closed, Jane then went on to his next mission.

Bringing Bosco and his team a peace offering of donuts, Jane claims that he’s given up and won’t bother them again. Though Bosco isn’t convinced and tells the agents to remove the donuts, he’s missed the bug that Jane planted under the table–the same bug the fixer had used to monitor their investigation. It’s clear he hasn’t given up at all.

In “The Scarlet Letter”, Rigsby once again chickens out when he has the opportunity to ask Van Pelt on a date. And Lisbon finds herself toe-to-toe with a department shrink who won’t let her off the hook on attending therapy for the near-death experience she had at the end of the last season.