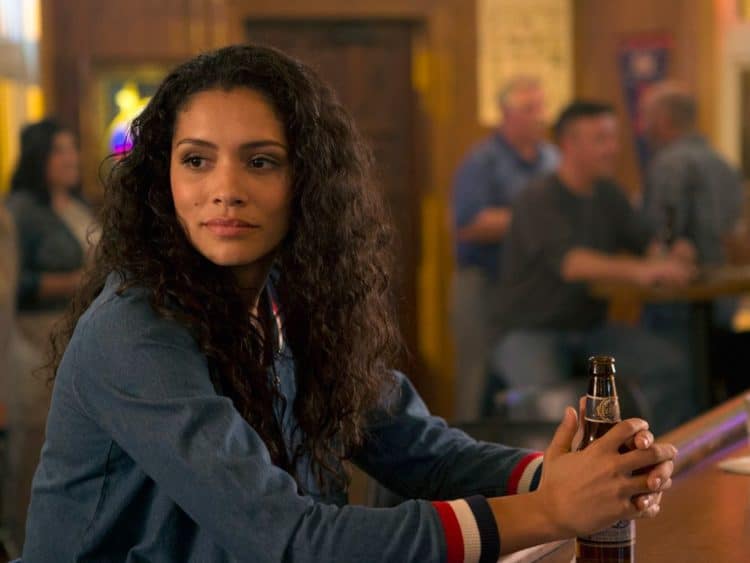 She’s gorgeous, talented, and somewhat mysterious. Miranda Mayo has been on our radar for a little less than a decade, but she’s used her time well. It seems this twenty-nine-year-old actress is really going places. We’ve been enjoying her as Stella Kidd on Chicago fire for the last four years, so we looked into this enigmatic and lovely actress to see what we could learn about her. We turned up ten things you didn’t know about Miranda Rae Mayo.

Miranda was one of the teeming thousands of young hopefuls who move to Hollywood each year to attempt pursuit of their theatrical dreams. Most don’t make it because the industry is simply flooded, but Miranda was one of the lucky and talented few. In fact, she didn’t even have to wait very long to start making her dreams a reality. Mayo moved after graduating from high school and began her modeling career. Then in 2011, she got her first role in Law and Order: L.A. Two years later, she picked up a recurring role in BEts The Game, and she’s been off and running as an actress ever since, working steadily.

Miranda has a spiritual side. Her father was catholic, and she attends services at a ‘spiritual center.’ Miranda told the Chicago Sun-Times that she feels there’s a magical undercurrent to life that connects us all. Mayo doesn’t seem to subscribe to any particular dogma. Finding your spiritual center can be tough, but this is one woman who knows what she’s about. Miranda believes her thoughts manifest her reality.

When it comes to sheer talent, Miranda is far more than just a model-turned-actress. She writes her own music and plays the Cello as well as the piano. Moreover, Mayo is an avid fan of other musicians, including Billie Holiday and John Coltrane. With artistic tastes like that, it’s no surprise she’s so centered and down to earth in her approach. Many actors can get lost in their fame and lose touch with the other parts of who they are. Miranda does yoga, runs, and plays music to help keep herself grounded and healthy.

When she’s not buying tickets to see Michelle Obama speak live, playing music, working out, or on set, Miranda takes time out to help her community. Earlier this year, she decided to raise money to help young people stay centered as well. Miranda and some friends organized The Eleutheromania Experience and managed to raise over five thousand dollars for the Conscious Teen Leadership program at Bodhi Chicago. Eleutheromania is the frantic zeal for freedom.

Mirandas’ live auction “Stripsale” to raise money for teen leadership wasn’t her first good deed by a long shot. As a budding philanthropist, Mayo personally donates to several charities regularly, including Reading for Kids, Peace Action West, Amnesty International, and Angel City Pit Bulls. Her involvement in her city and community, like her good nature, is far more than skin deep. Someone needs to get this woman a profile on looktothestars.org already.

Being a local (and national) celebrity has its perks, and the cast of Chicago fire is feeling right at home even when they’re not on set. When Miranda Rae Mayo bout a three-bedroom duplex condo in Bucktown for $600,000, it made the news. Several members of the Chicago Fire cast have become local homeowners, and clearly, the community is embracing them wholeheartedly. Miranda lives near co-star David Eigenberg, who also chose Bucktown for his home. Jesse Spencer and Taylor Kinney also bought homes in Chicago for over a million dollars each.

During her time on Pretty Little Liars, her character Talia had a lesbian romance with another character named Emily. Though Miranda didn’t know when she was cast that her role would be LGBTQIA, she had no problem with it. In an interview with AfterEllen,reporter Chelsea Steiner asked if she was excited to make out with Shay Mitchell, the actress who played Emily. Miranda’s response, “I mean, who wouldn’t be excited? The girl is gorgeous, and she’s so wonderful to work with…”

We already mentioned that Miranda raised money for teen leadership, and she donates to Reading for Kids, but her love and care for America’s youth go deeper. Miranda used her celebrity to help contribute to this year’s Red Nose Day along with many other stars. The somewhat silly noses have a much deeper meaning. By wearing a red nose to get attention, famous faces are helping bring awareness and funding to help end child poverty. The Red Nose Day organization has raised over a hundred and ninety million dollars in the last five years.

Miranda’s parents may be divorced, but it hasn’t changed anything about her bond with her mother. Mayo may not spend much time chatting about her family and personal life, but she wished her mother a heartfelt happy birthday on social media. Miranda expressed her gratitude and love via Instagram this year. It’s good to see she hasn’t forgotten her roots and heartwarming to know that she’s stayed connected with her mother.

Whenever stars come up, someone inevitably asks two questions: What’s their net worth, and are they single? In Miranda’s case, we have no idea. She bought a six-hundred thousand dollar home. Plus, she’s been a working actress for almost a decade, but she doesn’t share her financial details publicly. Recently there was an unconfirmed rumor that she might be dating one of her male co-stars, but things never went further than that.

We enjoy seeing Miranda, whether she’s modeling, acting, or raising money for her favorite charities. From her first role in 2011 to her time on Days of our Lives and through her current show Chicago Fire, we love watching the talented and gorgeous woman show off her heart and talent. Hopefully, Chicago fire will run for a few more seasons, at least. We think Miranda will have a long and full career where we get to continue enjoying her stage presence for years to come.