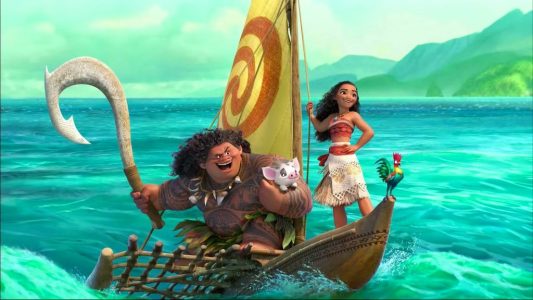 2016 has been an uncommonly fantastic year for animation.Â  Most years can only bank on a few worthwhile animated features — a Disney, a Pixar, a Ghibli and maybe a wildcard from someplace like Laika — but this year has seen more than just the usual suspects.Â  Even as summer tentpole after summer tentpole fell to scathing reviews and popular disinterest, we got Zootopia, Finding Dory, Kubo and the Two Strings and Sausage Party.

Even Kung Fu Panda 3 hit the mark.Â  Even that silly Return of the Caped Crusaders movie.

We’ve only got one more month to go in 2016 and four of my five favorite movies from it have been cartoons.Â  That’s not even counting The Red Turtle, Long Way North and Your Name: three visually breathtaking foreign films that are each strong contenders for any end-of-the-year list. 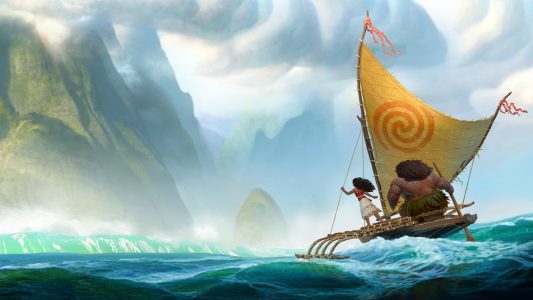 Moana, the latest animated film to hit theaters, opens by telling the legend of Maui: a shapeshifting demigod who stole the heart of the island goddess Te Fiti and vanished after fighting the lava demon Te Ka.Â  But without her heart, Te Fiti’s power of creation receded from the world, and death and darkness slowly consumed the Pacific islands for one thousand years.

The title character, Moana, is the teenage daughter of a tribal chief of Polynesian islanders.Â  Although she dreams of adventures out on the Ocean — or at least a quick boat ride past the reef that guards their tropical utopia — she is reluctantly groomed by her family to be the next chief: to keep her feet on the ground and deal with the daily minutia of island life.

With their crops succumbing to a mysterious blight and the fish disappearing from the water, however, she knows that it is Te Fiti’s blight come at last to claim her home.Â  Despite her father’s forbiddance, she steals a boat — and a mentally challenged chicken named Heihei — in order to find Maui and return the Heart of Te Fiti to its proper place before her home, and everybody she has ever known, is destroyed by the spreading darkness.

Moana is as predictably wonderful as you would expect from a Disney animated feature.Â  It is the perfect cross-section of Frozen and Pocahontas, with the visual flair of The Wind Waker thrown in for good measure.Â  The gorgeous animation and exceptional music numbers are worth the ticket price alone, never mind the epic narrative and endearing characters that come with them.

In the tradition of the most memorable and beloved Disney princesses, Moana is a well-meaning girl who only wants to find her place in the world, which, unsurprisingly, puts her at odds with her overbeating — although no less well-meaning — father.Â  Only ever concerned for her safety, he forbids her from sailing, a fact which later complicates her voyage across the ocean to save her people.Â  Her grandmother, a free spirit who dances with the water, helps guide her to the woman she wants to be, not simply the one that she was born to be.

The real show-stopper, though, is Maui, who perfectly toes the line between “surface level narcissist who’s in love with the sound of his own voice” and “endearing character putting up a brave front to hide a much deeper soul.”Â  We can’t help but be charmed by the charismatic hero, despite every fiber in our being screaming at us for being so easily suckered in by his act.Â  He’s loud and boisterous and self-absorbed in a way that characters — or at least sympathetic characters — simply aren’t allowed to be in movies.Â  He’s a Polynesian Beowulf: absolutely dominating every scene he’s in, and us cheering him on despite the protestations of our better natures.

Although “How Far I’ll Go” is obviously going to be this year’s “Let It Go,” it was Maui’s song, “You’re Welcome,” that I found myself humming as I left the theater.Â  It’s a playful, upbeat number in which the endlessly narcissistic Maui rattles off all of his legendary accomplishments, from slowing the sun to make the days last longer to fishing islands out of the sea.Â  It’s the kind of song that I imagine Gaston would sing if he wasn’t a sexist pig.

Moana is this year’s Frozen in more ways than one.Â  Both are narratively flawed films that fall just short of the Disney Renaissance era movies that they’re desperately trying to be.Â  Moana’s story frequently meanders away from its laid out plot.

Maybe it’s from emulating the disjointed mythologies and epics of centuries past.Â  Maybe just from an unfocussed script. 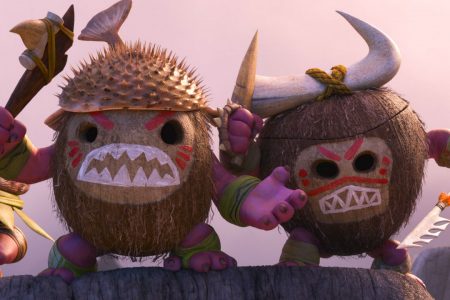 One glaring instance of this is an altercation with a band of pirates made from living coconuts.Â  It interrupts a fight between Moana and Maui and takes up a considerable chunk of screen time with a fun, but ultimately pointless, bit of action.Â  It’s time that could have been better spent on Moana’s other, more important, adventures, like retrieving Maui’s magical hook from the realm of monsters or their initial confrontation with Te Ka.Â  Or, more preferably, it could have been used to develop her and Maui’s relationship even more.

What’s important, though, is that despite this, the journey never ceases to be enjoyable.Â  This makes it easy enough to overlook in the grand scheme of things.

Heihei is easily my pick for “most pointless animal sidekick for a Disney princess.”Â  There are some funny bits between him and Maui, but Maui is so absorbing a character that anything he would have done instead would have been just as entertaining to watch, only without being burdened by a comic relief non-character.

Despite its ultimately minor flaws, Moana is an absolute gem of a film.Â  It is one of the year’s best and will be a beloved childhood classic for the next generation of movie-goers.Â  Having already braved the raging mob of jam-handed kids and their parents to see Frozen, I can say that it is just as worth doing for this movie.