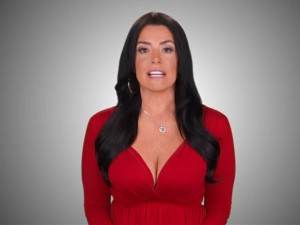 If there’s one theme I can draw from Sunday’s second season premiere of Mob Wives, it’s that change is more difficult to put into action than it is to put into thought. Though the fighting and bravado were some of the main reasons the show received attention when it debuted, season one of Mob Wives spent an admirable amount of time showing that for all the talk about “the life”, these women are really striving for self-improvement. They were trying to break free from toxic romances, find an identity aside from their mob connection, and simply raise their children to not make some of the same lifestyle choices they had made themselves. It was a nice change to see a “wives” cast legitimately want to become better people, which made every little victory that much sweeter and every little setback that much more devastating.

As much as the second season premiere of Mob Wives focused on the ways that Drita, Carla, Renee, and Karen were trying to alter themselves, either behaviorally (Drita), romantically (Carla), or physically (Renee), by the end of the hour, it seemed obvious that the Mob Wives have a long way to go before evolving. That’s not necessarily a bad thing, however; part of the charm of the show is how in-your-face and no-BS the cast is, but it kind of demonstrates how much of a hold “the life” can have on an individual and how decades of behavior patterns can be hard to break.

Look at Renee, who we spent most of the episode with; after seemingly conquering a 20+ year battle with depression, she received a major setback from a botched total body lift that left her without an ass and with a lot of baggage. The physical change that she tried to undergo, in an effort to shed 35 pounds and build herself a new body, drastically impacted her mental change; instead of continuing her effort to gain independence and break away from “the life”, she’s now lost a lot of emotional ground that she’ll have to make up just to get back to where she was at the beginning of the episode. (Plus, she had to become dependent on other people during her long recovery, so it’s a double whammy of arrested development.) In the end, after the 6.5 pints of blood lost, 16 days in the hospital, and further damage to her relationship with Carla, Renee looked good and was humble enough to understand it was a bad idea to get the surgery, but after being a ways up the hill to self-actualization, she’s now at the bottom looking up.

You could also look at the cast changes as evidence of change not affecting the whole of Mob Wives, as we got to know Ramona and Angela (aka “Big Ang”) tonight. I was a little worried about the new additions, considering that the cast already had a lot of chemistry, but for the most part, their roles were limited. If their appearances are any indication, I’m already over Ramona and am filling out my paperwork for the Big Ang fan club as we speak. Ramona came onto Mob Wives nearly foaming at the mouth, being loud (in a bad way), very hyped up (again, in a bad way), and not doing anything to curtail Karen working herself up in a tizzy over Drita. Granted, Karen was on a mission all night, so I don’t know if Ramona could say anything to calm her down, but the point is that she seemed very high school with how she approached everything. I mean, following Karen out onto the balcony with Drita and getting up in her face? C’mon. Big Ang, on the other hand, seemed appreciably chill as she tried to calm Drita down outside, which is something I think Mob Wives needs. I’m for fighting and smacking all the livelong day, but an impartial mediator could help snuff out any potential sparks that may come out and (hopefully) get the ladies to think before they pounce.

The biggest thing that indicated that change may not be in the imminent future for the Mob Wives is the fight between Karen and Drita that will be shown next week. (I’m shaking my fist at the sky in frustration, VH1.) Independently, the two had expressed desire to patch things up and at least be civil to one another, but once they crossed paths (both technologically and in person), all attempts at civility were null and void. Drita, in particular, seemed to be making a very concerted effort to avoid conflict, taking boxing classes to sublimate her anger/stress, avoiding Karen at all costs at Renee’s party, and requesting to talk on the balcony. I don’t know, I believe her talking heads and do think that getting into a fist fight was the last thing Drita wanted to do, to break her cycle of violence, to help Renee have a better party, and to protect whatever fragment of friendship she could still have with Karen in the future. But she’s not at the point where she can just walk away, especially if two chicks back her into a wall and try to yell at her.

It’s obvious that Karen wanted to fight from the moment she got there (if she didn’t, why even go up to Drita at all?), but the kicker is that she only gets balls when A) she’s outnumbering the other girl and B) if security is holding her back. If either of those aren’t there, she’s all bark and expect her voice to get louder with the addition of Ramona.

The second season premiere of Mob Wives was everything I like about the show. Though the ending touched on being anti-climactic, the rest of the episode was the show’s usual mix of one liners, self-awareness, vulnerability, and mind games, a pretty fun way to begin the season. I don’t know if Drita, Karen, Renee, Carla, Ramona, or Big Ang will make any huge personal progress during their time on Mob Wives, considering there’ll always be an element of TV-influenced foolishness, but I know that the show has made me care what happens to them and if that’s not something, I don’t know what is.

Thoughts, Quotes, & Observations:
-“Did I say Ash or ass?”
-“Yeah, you don’t have to tell me you beat up half of Staten Island.”
-“All I wanted was a little tiny ass.”
-“Now I don’t have to hit anybody.”
-“Uh uh, sweetie pie. There’ll be no violence up in this.”
-Do you think Carla will go back to her ex-husband? I hope she stays away, not because I think Joe’s a bad guy, but I think that it’d mess with their kids too much. (What if they break up, etc.) There’s nothing wrong with a positive co-parenting relationship.
-Probably the main issue I had tonight was Karen’s talk about how Drita told people she split Karen’s head open, sent her to the hospital, etc. I’m sorry, I don’t think Drita’s dumb, let alone dumb enough to say this about something that was filmed for TV. If Karen had been injured during the roof top fight last season, you better believe it would have been shown, so stop it.
-How apropos was the toast between Drita and Carla “to a new beginning”? Well played, editors of Mob Wives. Well played.
-If you want to follow Ramona or Big Ang on Twitter, there ya go. The other Mob Wives accounts can be found here, for those still not following anybody.
-You can check out all the music from the premiere here. My personal favorites were the two songs from Mutemath, who produced one of my favorite albums of 2011. Highly recommended.
-Next week on Mob Wives: The fight, y’know, actually happens. Nobody goes over the edge, but punches will be thrown and hair will be pulled. Welcome back, ladies.