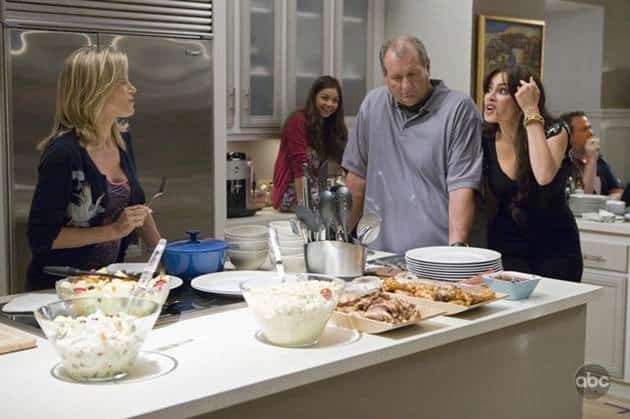 Can Modern Family sustain its funny? This episode put that to the test with it being with a guest star that is notable or the novelty of being a new show. Five weeks in and this show just gets better and better.

Tonight the Prichett Clan is getting together for a football BBQ at Jay and Gloria. The day begins however as Manny is drinking a cup of Java and Jay questioning on his latin routes. In Claire’s house, Haley is begging for some money, lots, for a dress, and Luke is ready for school in his backwards, inside out shirt. Cameron however is so excited for this night. Cam was a football player in college and is a very big fan but Mitchell could care less.

Claire gets a call from school alerting her that Luke got in a fight with someone a school today. Phil and her go to the office to find that her dad Jay and Gloria are there because Manny and Luke were the ones fighting. After a lengthy discussion about relationships between them, the parents are thinking of a way to sort out this awkward uncle-nephew relationship. The parents also come out of it with a tension in the air with Claire feeling that Gloria hates her and visa-versa.

Everybody is about ready for the party as Mitchell studies up about the game of ball and Cam has got his face paint on. As everybody arrives at the house, Phil tries to get Manny and Luke to talk it out while Jay just says to get it together. Claire and Gloria still have an awkward greeting, and Phil comes in with his moderating, and it is not helping while Claire argues about why she does not like Gloria. In the den, Jay is surprised by Mitchell interest in the game. Manny and Luke come into tell Claire about how much fun they are having but Luke hears what the adults are talking about and tells Gloria how his mom always says she is a “coal digger” (Goldigger!)

To get out of the tension Jay asks Cameron and Mitchell, as gay men, how attractive they think he is. Mitchell is so taking back but Cam reveals Jay is very attractive. Oh-la-la. Phil continues to try to create happy air by talking with Gloria in her room, and letting her vent. Claire feels terrible and Gloria says the only way for her to forgive her is by jumping in the pool with her clothes on.

Claire wants to prove that she loves Gloria. She jumps, and the air is lifted, and of course as any good pool jumping goes with the family, everybody needs to jump in! Love those moments.

Solid episode of the show, great moments and one liners that prove this is one hilarious show!