It is a family affair tonight like always on Modern Family, were some issues come to the surface…. 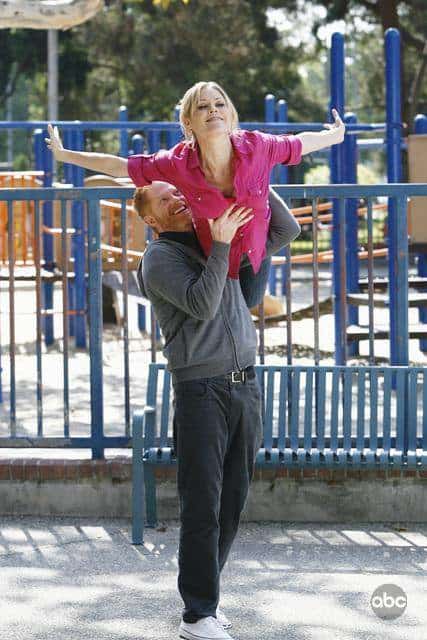 The episode begins as Gloria and Jay’s Manny is fencing in a competition for the championship with the entire family in the stands. Cameron is annoyingly shoot a home “film” as he calls it with a long extender that is bugging Mitchell. Jay is so excited screaming and happy that Manny has a sport along with Gloria. When he gets excited, he lovingly slaps Phil all over and he has a killer grip. The kids, Alex, Luke, and Haley are arguing, Haley’s phone died so Alex tells her to rub it on her head so the static recharges it. Ya right, while the kids fight Gloria and Claire are happily jumping and touching right in front of the bug-eyed Phil.

Claire and Phil try to figure out what there kids are good at after Jay makes a remark about Manny’s skills. They come up with Alex is just great at everything, Haley is pretty, and Luke while there has to be one in the bunch. Manny wins, and is going to more on to the championship later on in the day, and the family is ecstatic. As everybody is leaving, Mitchell makes a comment about Claire dropping the ball on being a champion when they were younger.

When Cam and Mitchell get home, Cam wants him to talk out there problems. Mitchell reveals that Claire and Mitchell were a ice skating pair when they were kids, and Claire dropped out of the championship and he has never forgive her. Phil comes up with the idea to come up with something Luke is good at, the first thing is baseball. They go out to throw some ball and maybe this isn’t the right thing. Every pitch goes on the roof, down the driveway, or in Phil’s jewels! Jay is so excited for the championship, he made a t-shirt saying “Who da Manny,” to celebrate just as Manny’s says he is retired because he does not want to fight a girl. Gloria takes much offense to this and tells him he has to compete and beat her!

Phi is showing a house to a lady that is going really well until she does not think it is right to kids. Luke comes in and says how much he loves this house, making the lady come back with her husband later in the day. Phil thinks he has found what Luke is good out, selling!

It is championship time, and before they go inside, Cam makes Mitchell and Claire talk it out. Claire finds it so ridiculous that he is still talking about the skating and she says the reason they dropped out was because he did not want to hurt her. As they hug it out, Mitchell makes a stupid mistake by trying to prove he still got the skating lifts. All the family except for the two sparring siblings, are sitting in their t-shirts next to the competitor’s mom, scratch that nurse, after she says the kid is in a hospital, ouch. Phil and Luke are still showing the house until Luke trips on the stairs, and starts saying how he hates the house. Maybe selling was not this thing. Gloria and Jay feel bad that Manny is fighting this kid, but he is ready, battling it out until he WINS!

Claire and Mitchell are talking about their childhood mishaps and just how stupid they were to everybody, Claire gets up and is ready after the many years to perform that final skating routine. They dance off to find the family coming out embarrassed with a huge trophy, Cameron has his Cameron and is filming this great brother and sister moment! Jay comes on to say that it matters who wins and loses, every parent wants a winner, but when parents push to hard, but what comes out of it is a nice big trophy.

That is a wrap, no new Modern Family next week due to the CMA Awards, so check back in two weeks for a big episode featuring guest stars Elizabeth Banks and Ed Norton called “Great Expectations.”