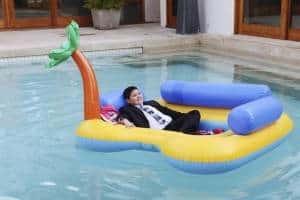 It’s been a couple weeks since we last saw Modern Family, so catch up with my review of the last installment, “Chirp.”

After last week’s episode that I felt was rather disappointing, I was hoping to get a better Modern Family outing this week. Let me say that not only was “Manny Get Your Gun” better than “Chirp,” this may have been the best episode of the season so far. True, the idea that “adults still act like children” is a well-trod one for sit-coms, but Modern Family‘s take on this theme felt fresh and was flat-out funny.

The set-up showed the whole family gathered for Manny’s birthday dinner, but all upset for unknown reasons. The action then flashed back to thirty minutes prior to dinner to play out how everyone became upset. Now, I will fully admit to being a sucker for this plot device — I like joining the action in medias res, then flashing back to find out how the scene came to be — because it ads a bit of suspense and detective work to the proceedings. Of course, in a sit-com, the “suspense,” as it is, is derived from typical misunderstandings and missed connections, but for me, the joy of this framing device is I get to try to figure out what is the event that really completes the first scene. Is it the humorously “bad” thing that’s happening right now, or will something worse happen in a couple minutes? The device makes me anticipate increasingly funny jokes more and more, and when a show like Modern Family can deliver on those jokes, I am fully content, as I was this week.

Each of the three plots introduced small misunderstandings that had the adults getting frustrated with each other, but as the episode progressed, each of those reasons for being upset was outdone by another. Phil and Claire disagreed about Phil’s love of Family Camp, but then argued about the fastest way to the restaurant, and then each had their own breaks about how they are viewed by their children. Cameron and Mitchell first argued about taking too much time to try hand cream, then helping the old man, then Mitchell’s participation in a flash mob of all things. Jay and Gloria’s argumetn solely centered on the lost keys, but it, too, escalated throughout the episode as Jay first chided Gloria for losing the keys, then he hid the keys that he had actually mistakenly taken, then Gloria started shooting things with Manny’s new bee-bee gun. As all of these stories became more frenzied, I found myself wondering if this was the thing that led to the state of the family at dinner, only to be pleasantly surprised by the ante being upped in each story’s next act. As the written jokes forcefully landed throughout the episode (some my favorites are below, as always), I had nothing but a huge grin on my face the entire thirty minutes.

Even the treacly music and summary (by Manny), that I have often derided around these parts, was effective. The difference, was that instead of having Jay, who usually receives this responsibility, performing a voiceover with flashes of the three plots rolling underneath, Manny was actually summing up his experience during the episode, which so happened to apply to everyone. Since this speech was actually started at the top of the episode, it felt like a natural culmination of Manny’s story (and by extension, everyone else’s), rather than an obligatory button added to the end to make sure the audience gets that warm fuzzy feeling. Bravo to the writers for this ending.

One last comment: last week I wrote an article about Modern Family and its recent use of race-based jokes, and how I thought this was a form of lazy writing that I felt was beneath the otherwise excellent Modern Family writers. I’m sure this week’s episode was written, shot and in the can before last week, so there’s no way the race joke in “Manny Get Your Gun” was any kind of response to the little flare up I and others wrote about. The “If it ain’t white, it ain’t right” line, and the subsequent pissed off African-American taxi driver, however, felt like a little play on the concerns I wrote about. It was if the writers were saying, “Yeah, we get it. We, like Phil, didn’t realize we were possibly offending anyone. We 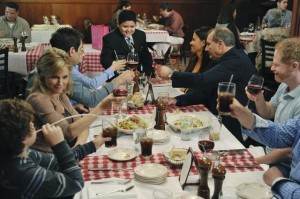 were just trying to be funny.” Again, this probably just a coincidence, or maybe I am reading too much into it because I wrote that article but to me, the joke landed because 1) it was funny, but 2) because it felt like a mea culpa. If this is the end of those type of jokes, I’ll be relieved (again, because I think race-based jokes are cheap laughs, not because I can’t, or we shouldn’t, laugh at comedy about people’s differences). We’ll have to wait and see.

Enough of the serious stuff. On to some of the best lines of the episode (if I included, all of them, I essentially would have transcribed the entire episode, so here’s just a few):

Luke: I’m ready mom.
Claire: Are you sure, honey?
Luke: Yup!
Claire: Take a quick look at your feet.
(Luke looks down and sees bare feet.)
Luke: Oh, come on, Luke!
(Side note: Luke is really the funniest person on this show. He has reached “Brittany on Glee” levels of funny in which every single thing he says is freaking hysterical. Kudos to Nolan Gould, a MENSA member, for playing a not-so-bright kid so well.

(Phil is speeding to beat Claire to the restaurant.)
Alex: Dad, that was a stop sign.
Phil: I’ll stop twice on the way back.

Phil: You know I love your mother, but I think you also know a certain look she gets that says, “Listen to me. I’m always right.”
Haley: You mean her face?
Phil: Now we’re getting this. If we’re right this one time, we never have to be right again!
(Phil begins to lose control of the car.)
Phil: Sweet baby Hay-seuss!!

(Manny floats in the pool, contemplating his “lost” childhood. Jay sees something in the bottom of the pool.)
Jay: Is that a skateboard down there?
Manny: It’s the second thing that slipped right out from under me today.
Jay: OK, time to get out.
Manny: The first was my childhood.
Jay: I get it!

(Gloria returns with the bee-bee gun and shoots a hole in Manny’s raft.)
Manny: You could have shot me!
Gloria: Oh come on, I could have unbuttoned your shirt if I wanted to.

Luke (to Claire): You do fun stuff. You put that potato chip in my sandwich. That was a crunchy surprise!

Alright everyone, that’s what I’ve got for “Manny Get Your Gun.” What did you think of the episode? Did you find it as winning as I did? Honestly, I laughed form beginning to end, and laughed heartily. Did you feel like the show was back on the right track? Please leave your comments and questions below. I’ll be back next week with another review. Until then, I’m off to go off script…it just feels right.