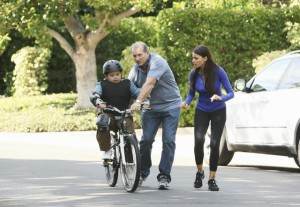 It’s been a long, long time since our last new episode of Modern Family, so catch up with my last review here.

This week’s episode, “Slow Down Your Neighbors,” was one of the series’s themeless episode, but unlike similarly structured episodes, I thought this one worked pretty well. Of the three plots (Mitchell and Cameron have a new, hot, Zen-practicing neighbor; Jay teaches Gloria how to ride a bike; Claire fights the fast-driving scourge of the neighborhood who happens to be Phil’s client), I thought the Cameron and Mitchell story worked the best. Modern Family has had a number of guest stars over its year and a half run, almost all of whom have clicked (really, only Ed Norton didn’t really work for me, and it wasn’t his performance, but rather the character that felt off). James Marsden as Barry the new neighbor may have been the best to date. Now, I will fully admit to being a Marsden fan — hell, I even saw 27 Dresses because he was in it — but I thought he knocked it out of the park. His nice turn from Zen to completely nutso was perfectly played, and it gave Jesse Tyler Ferguson and Eric Stonestreet some great material to play off. I’m not sure there would be a reason to see him in a future episode, but if the writers can think of something, I’d be happy to see Barry again.

The Gloria storyline was pretty lightweight, but offered some nice humorous moments, some good physical comedy (people crashing into bushes = always funny), and one of the best lines ever uttered on the show (see below). What it also had was a continuation, albeit a small continuation, of the deeper look into Gloria as a person. In “Dance Dance Revolution,” I was very happy to watch Gloria explain to Claire that she desired to be taken seriously and seen for more than her looks. The scene gave the character a chance to exhibit some real depth. Here, when Luke was trying to help Gloria overcome her fears 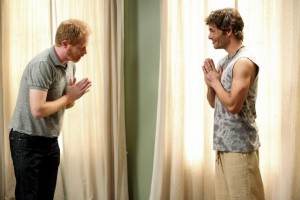 of riding the bike, she admitted that she didn’t want to be embarrassed by falling. Now, of course, no one likes being embarrassed, but the way the the line was played by Sofia Vergara, and in light of the confession in the lat episode, I felt like we were digging even deeper into who Gloria is. As a fan of character evolution in my comedic series, this was a welcome treat.

Then we had the Dunphy plot: Claire tries to stop a woman who drives like a maniac through the neighborhood, not knowing that the driver is one of Phil’s potential clients. While very funny at points, a couple of things didn’t work for me. First, it was just a couple episodes ago in “Chirp” that Phil complained about how he didn’t have any work, but in this episode, he was competing to be the Salesman of the Quarter. Now, I suppose one could still be the top salesman if no one is selling very well, but this incongruity just struck me as odd. (We also learned that Phil typically sells multimillion dollar homes, which leads to the family’s comfortable living. This is a minor point, but it provides some nice background.) Second, this plot played into the “Claire is a high-strung nag” stereotype that Julie Bowen is often faced with playing. It felt like she did nothing but yell and complain the entire episode, which does a disservice to the character and the actress. Claire has never been more interesting, and Bowen never more fantastic as the times Claire gets to be romantic ( “My Funky Valentine,” the anniversary episode) or competitive (“Many Get Your Gun“) or some other emotion/situation where she isn’t just annoyed by the people around her. I hope there are more plots like the latter for Claire coming up soon.

My last quibble (and really, I enjoyed the episode, so these are just minor quibbles) consists of something I never thought I would write: there was too much Luke. Now, I have often written about my love of the youngest Dunphy, and Nolan Gould’s performance. The lines that are written for him and the performance of those lines provide a perfect counterpoint to Phil’s childlike behavior. But that is the essence of why Luke works so well as a character: he is reactionary, and his humor is best served when he is commenting (not always literally) on the scene around him. He is funny because he is often lost in the adult world occurring around him, and this is the situation we have always found Luke in throughout the series. In this episode, however, it felt like Luke was driving parts of the Dunphy story, mostly because of his increased line count. Fortunately, most of what he had to say was very funny, but I became very aware of how much he was 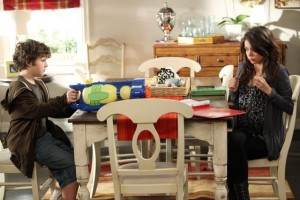 speaking, and it felt odd. We are used to Haley or Alex going off on mini-monologues, but not the slowest of the Dunphy children. So, to have Luke speaking so much here felt false. For the first time, it felt like the show was specifically reaching out to the audience to try to give them more of what they want, but I realized, Luke needs to be used in smaller doses.

What may have helped was giving some of his lines to Alex, but that would have required her actually being on the screen. For the second time in I think four episodes, Alex was nowhere to be found. I understand that sometimes on television, actors aren’t used in some episodes to save money, but I can’t imagine Ariel Winter is really breaking the show’s budget. I wonder why she’s been absent. Huh.

Luke: I think you pull him out of his car, and we all take turns punching him in the stomach until he barfs.
Claire: I think I’m going to turn over his license plate to the police.
Luke: Order a pizza and call the cops. We’ll see who gets here first.
(Phil walks up.)
Phil: What’re you guys doing?
Luke: What the cops won’t.

Gloria (turning down bike riding lessons): I pass. It doesn’t make sense. There’s no reason that thing should stay upright.
Jay: There’s no reason you should stay upright. It just works.
(I found this line to be absolutely hysterical. I laughed so hard I snorted. Seriously. Maybe I have a low sense of humor that I respond so easily to boob jokes, but the line was so perfectly crafted and so well played by Ed O’Neill that I couldn’t help myself.)

Claire: Phil, I need your help.
Phil (not looking up from his iPad): With what?
Claire: What is the one thing a speeder can’t outrun?
Luke: Oooo! Bullets! A laser! Oh, I know…a falcon! Dad, jump in!
Phil: Not a good time.
Luke: A laser-falcon!!
Phil (whispers): Oh, that’s awesome!

Well, there you have it for this week. What did you think of the episode? Are you just happy to have Modern Family back? (Man, did it seem like forever without new television programming, or what?) Which of the three plots worked best for you? Did you enjoy your extra dose of Luke this week? What did you think of James Marsden? Please leave your questions and comments below. I’ll be back next week with another review. Until then, I’m off to live in my own truth.