Missed last weeks review? Read what Michael had to say about “Regrets Only” here.

This week on Modern Family, we got a look at life (adoption), death, and how to talk to your wife. With Mitchell and Cameron dealing with a problem with Lily’s adoption, Jay wondering if Gloria will find a new burial place (and a new husband) after he is gone, and Phil learning how to properly handle situations Claire brings up, Modern Family gives every character this week something to worry about. Do all these story lines cause a bit of disorder in the episode or does everything chaotically flow to create a great episode? Read on to find out.

With Modern Family being a multi-family show, there is always going to be problems to address. With Mitchell and Cameron’s story being featured heavily this week, it’s only right to start there. When Cameron realizes that Mitchell has given Lily only the Pritchett last name, you’d think that Cam would go into a 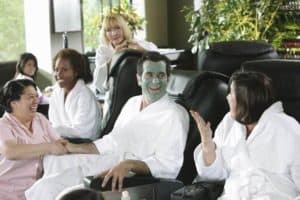 plethora of crazy antics. That however is not the case as we were given a different side of Cam this week. It was nice to see Cameron do a complete emotion change that allowed for a great make up moment between him and Mitchell. While there was great humor between the couple this week, the moment when the two make up was really a satisfying end to the story. I think the Two Monkeys and a Panda book really helped with the ending and helped Cameron and Mitchell realize Lily is starting to learn that adoption shouldn’t be looked at as a bad thing in her life.

Having teenagers in your family can really make your life stressful. I can say this from the teenage point of view with great confidence. Having other people in your life that want you to do everything for them can cause even more stress. We all know that Claire is the one who usually deals with the major problems in the Dunphy household but it seems Phil may soon be reading to lend a helping hand. While dealing with a clothing argument between Alex and Haley, Claire tries to get Phil to do one little thing for her. With Phil being at the spa surrounded by women, he tries to do the right thing and give Claire advice on what to do. While this backfires at first, Phil is taught by the women on how to really help out his wife. It seems that Phil’s reactions to Claire’s needs may be changing but, even with the changes it still comes across with perfectly executed humor. With Phil growing up in a sense, it will be interesting to see if this 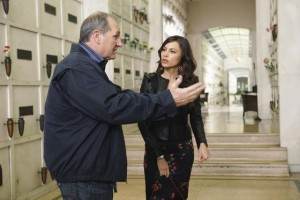 transformation sticks throughout the season.

Jay and Gloria’s story was somewhat different then the other two stories this week. With Jay beginning to worry about how Gloria will live once he dies, the story provided some depth into the character of Jay but, felt a bit out of place with the rest of the episode. Seeing Jay begin to feel like he will be replaced, he changes his afterlife preparation to make sure Gloria and whatever man she may marry never forget him. Luckily, through the story Manny told Jay, it looks like Jay won’t ever be replaced as he is the only one Gloria feels equal to as a mate. I have to say, it’s always nice to see great father/son moments and this week Modern Family gave us a great one between Jay and Manny. Let’s hope that we the viewers can get more of these heartfelt moments between the two.

With all three families dealing with their own problems this week, Modern Family could have had too much confusion to grasp a great episode. Luckily, the three seperate stories provided mini breaks for each other and were able to hold their own during the half hour. A

What did all of you think about the episode this week? Sound off in our comment section section.