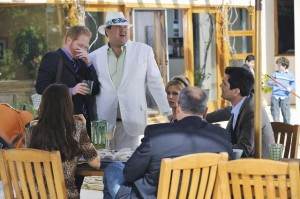 If you missed last week’s Modern Family, check out my review here.

In last week’s review, I wondered if Modern Family would be able to match the fantastic run it went on at the end of Season One when it brought us “Hawaii” and “Family Portrait.” Halfway through the final two episodes of Season Two, I have to say the show is easily meeting the standard set by those final Season One episodes. “See You Next Fall” had me practically rolling falling off my couch with laughter. As funny as it was, however, the episode also had one of the nicest emotional moments of the series: Haley’s admission of failure to Alex.

The theme of the episode was one of its most explicit, as “everybody’s got their stuff” was repeated at least twice in the episode, and was part of Alex’s revised commencement speech. It was Alex’s speech that served as the somewhat randomly occurring “treacly music summarizing soliloquy” as well, so the theme pf the episode was driven home. While I normally would take this opportunity to rail against this bit of the episode (as my regular readers know how much I dislike the treacly music summary), I was too struck by Haley’s admission to worry about it.

A common topic of my reviews this season has been my desire to see these characters grow as the series develops. There have been bits and pieces here and there, but Haley’s admission tonight that she is failing biology and is sincerely worried about not going to college and being left behind by her friends was striking. She followed that by telling Alex that she is pretty and has everything going for her. Now, we’ve all seen Haley have more sensitive moments, but this was a true moment of character development and growth. I like the idea that Modern Family can have moments like this, where a character’s insecurities can be revealed not for comedic purposes, but for dramatic purposes that are honest for the character. Jay and Gloria have had these moments, though I don’t remember off the top of my head any instances for the other characters (please offer some moments in the Comments below). I hope they will in the near future. 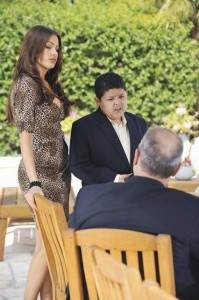 What made Haley’s moment stand out even more was that it was placed in the middle of one of the funniest episodes of the season. Modern Family is always funny, and that comedy, while varied, is most often dialogue-based owing to the brilliance of the writers and the actors’ vocal performances. In “See You Next Fall,” however, most of the comedy was physical: whether it be Phil smashing Jay with the front door (this earned my loudest laugh of the evening), Jay’s droopy face, Phil throwing Claire over the gate, everything involving the tandem bike, Phil and Claire falling down the hill, or, of course, Cameron running into the door…twice! I love witty dialogue as much as the next guy, but sometimes I just like watching people fall down and go boom. It is a testament to the writer, actors and directors of the series that all are easily adaptable to whatever is thrown at them, and that they execute the comedy with such skill and gusto.

While I have emphasized the physical comedy, it wouldn’t be a great episode of Modern Family without some really funny lines. Here are some of the best from this week:

Haley: I thought Sanjay Patel was first in the class.
Alex: He was, until he missed a few weeks when he was attacked by the robot he was building.
Phil: It’s happening people. Our hubris will be our undoing.

Phil (to the camera): “Guys, I can’t go to Vegas because my wife’s freaking out.” Trust me, that is not a phone call you want to make to a bunch of ex-college male cheerleaders. They will mock you with a hurtful, rhythmic taunt.

Luke is staring intently at a ball floating in the pool.
Manny: Hey Luke, do you realize that in two years you and I will be graduating?
Luke: Not now. I think I’m moving the ball with my mind.
Manny: Well, I’ll be graduating. 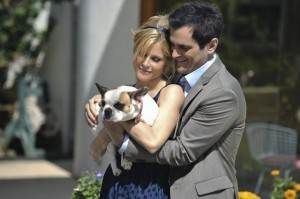 Claire: That’s what kids do: they leave and they don’t come back.
Phil: Well, ours will come back, right?
Claire: What if they don’t, and pretty soon it’s just the two of us?
Phil: I don’t want to go to Vegas anymore.
Claire: I know.
Phil: I just want to hug them and embarrass them in front of their friends.

Alright, that’s what I have for this penultimate episode of Season Two. What did you think about the episode? Did you find it as funny as I did? What did you think about Haley’s moment of vulnerability, and the existence of moments like that throughout the series? Do you prefer physical or verbal comedy? Is Sarah Hyland (Haley) looking way too thin or what? (Seriously. Did she look gaunt to you, or was it just me?) Please leave your comments below. Next week is the Modern Family season finale. I will be back then with another review. Until then, I’m off to become a social piranha.