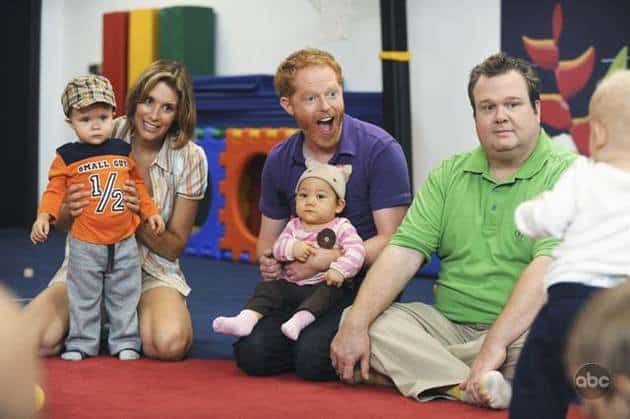 Modern Family turned to a bona–fide hit last week on ABC with its premiere which garnered Top 20 ratings. Episode two showed the show can stay a success at least in the laughs.

Right of the bat, the shows dads, Phil, Mitchell, Cameron, and Jay all talk to their respective cameras about what it means to be a great dad. Jay cannot think of anything, Cameron says it is support, Mitchell patience, while Phil just throws the question to Claire.

Phil, Claire, and Luke are biking around the neighborhood as they meet Desiree, a divorcee that lives down the block, wearing in a very revealing top. Phil is impressed and offers a dinner invitation but Claire is not for it. Luke meanwhile is riding a pink girls bike because he is not responsible enough to have his own. Jay comes around in his car and mocks Luke which makes Phil want to buy a new bike without Claire.

Cameron and Mitchell are still trying to fit in as dads, they are getting ready to go to a “Mommy and Me” class but Cameron is late and does not want to wear something ordinary.

Jay and Gloria are getting Manny off there hands for a few days, so they are excited to go to Napa for a very romantic weekends but before they can go Jay must work with Manny to set up a fan. Manny idolizes his dad who he is going to dinner with when really he is a slob and a flake. It creates problems with Jay

Phil buys Luke a awesome bike but he tells him he must be responsible. On Phil’s walk home he finds that Luke’s bike is unlocked on the street. He decides to teach him a lesson by taking it.

Mitchell and Cameron are the odd ones out at the class, as they start off with a family dance. Cameron wants to let it all out but instead he holds back giving an awkward move with Lily.

On the way back to the house, Phil finds Desiree again who has locked herself out of the house. Phil agrees to jump in her open window to get it to her bedroom! As Phil is finished the bike he stole, is stolen, prompting him to head to the bike store to argue with the guy that wanted him to get insurance. Phil asks Luke some questions to get him to confess and he does that the bike was scratched! Not stolen, so Phil now has two bikes. Uh, oh.

Jay and Manny are not getting along, and Manny calls him out and leaves him to finish while he waits outside for his dad.

Claire oddly enough confronts Phil but is not angry at all that the bike was stolen thanks in part to Phil odd non-coherent story but Desiree comes down with a third bike! She tells the story about the bedroom to Claire which Phil did not want to happen which makes Claire visible angry.

Cameron converses with some of the moms to find out that Meryl Streep was not good in “Mamma Mia” according to a mom. Cameron is shocked someone would say that, she is perfection according to him. Mitchell however gets very upset that Lily is not doing her blocks so he steals another kids stacked blocks. He then finds out, he was videotaped and that the attendant will look at the tape and give it to them after class. As the leave, another gay couple in all there pinks and purple who are welcomed with open arms, as parent’s dance comes on, Cameron has to do it. Dancing is in his blood, and he goes at it, taking control of that floor.

To much of Jay’s chagrin, Manny’s father is not coming after a call about having to stay gambling but Jay is nice enough to change his plans, not telling Manny the truth and have them all go to Disney Land. He tells the camera that now he knows the key to being a dad and that is just “showing up.”

We end the episode with Phil returning his stolen bikes while getting chased by a mob of kids. Cut to Black!

The episode was so funny and on par with the last, this show is going to rock. Check out full episodes at Hulu.com or ABC.com 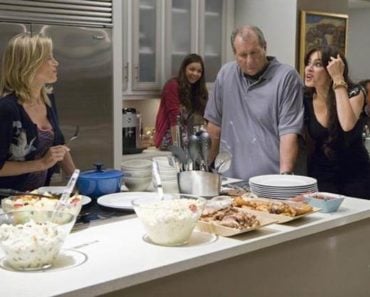