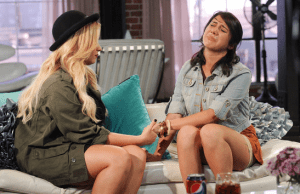 Last night, on an irregular day and time, The X Factor finally revealed its final 16 contestants that would be heading to the live shows and overall. After a lot of heartache and drama, the remaining contestants had finally gotten down to the moment of truth and after giving what was probably one of the most nerve wracking performances of their lives at the judges’ homes, were left to wait until their names were called one by one to learn their fates.

The group led by Britney Spears was The X Factor’s youngsters, and although they may be the youngest contestants in the competition, they certainly proved that they possess some of the biggest talent. Those who got the good news delivered to them straight from the pop princess herself were thirteen year old Beatrice Miller, returning contestant Arin Ray, petite powerhouse Carly Rose Soneclar, and the bubbly but talented Diamond White. Saying good bye to the competition from this group were wannabe rapper James Tanner and the ‘Baby Bieber’ himself, Reed Deming, both of which were disappointed, but showed great poise for their ages.

Moving in chronological order, Demi Lovato’s young adults group seemed to contain some of the biggest drama and heartache throughout the process. This stage of the competition was no different, with dueling divas Paige Thomas and CeCe Frey both hoping to make it to the live shows. Apparently Demi doesn’t mind the drama because she contributed to it greatly by stretching out the results maybe even a hair too much, but in the end she gave the good news to a tearful Paige and CeCe that they would be moving on to the next round. Joining these ladies in the live shows will be sultry singer Jennel Garcia and country R & B singer Willie Jones. While at one time Demi Lovato claimed that Jillian Jensen had broke her heart when she sang, last night Demi returned the favor by breaking Jillian’s when she sent her packing along with the Vanilla Ice singing Nick Youngerman.

Bucking the system with the age divisions was Simon Cowell with his Groups category. This category was a bit different in that only three of the groups had actually auditioned together originally. The other three were groups put together by The X Factor which consisted of solo artists from the auditions. Of the newbie groups, LYLAS, the impressive girl group, and LYRIC 145 made it through to the next round. Joining them were group originals Sister C and Emblem 3.Â  Sadly, the newly formed boy band Playback and duo Dope Crisis were sent home.

Next week barring that baseball doesn’t wreak havoc on the show again, The X Factor live shows begin in which the contestants will continue to be mentored by their coaches who will give advice on how to deliver the best performances possible. Â After having worked to convince the judges that they deserve to be in the competition, the singers must now convince America as well, with viewers calling in to vote, the fate is the hands of their fans.

Who are your top picks heading into the live shows? Who do you think will get the boot first? Share your thoughts on The X Factor forum.

The X Factor will be off this week due to the world series but will resume with live shows next week beginning on November 1st at 8/7c on Fox.