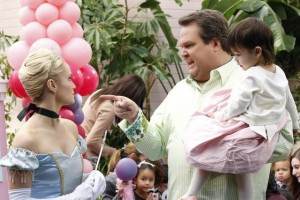 If you missed last week’s loving return of Clive Bixby, feast your eyes on my review.

This week’s Modern Family, “Princess Party,” had the potential to be one of the greats, as Fizbo was making a return, Shelley Long was back as Jay’s ex-wife, and Matt Dillon was guest starring as Claire’s ex-boyfriend, Robbie. While I found parts of it quite funny (Alex playing the Jaws theme as Dee entered the house was a master stroke), the sum total of the episode came up a bit short for me. The “Fizbo” episode in Season One was maybe the best episode of the series to date, so the prospect of seeing Cameron as the clown again really piqued my interest in the episode. Unfortunately, we only got one, semi-short appearance, and while funny, it didn’t give me any belly laughs. It’s probably my fault for having too high expectations for the episode, especially after the excellent run of episodes the show has been on, but then again, the outing fell short in the other stories as well. 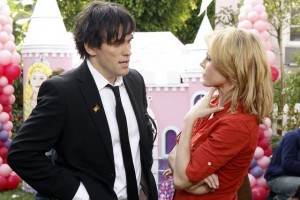 I like Shelley Long just fine, but I don’t feel any great need to have her return as Jay’s ex-wife. As was reiterated in this episode, she is the one who broke up the family. Further, the character is often so bizarre that she doesn’t seem to jive with the cast of characters we know and love. She feels too disruptive, and I feel like she’s more of an obstacle to the comedy than a facilitator. Coinciding with Shelley Long’s arrival was Matt Dillon as Claire’s high school boyfriend. Personally, I’m not a huge Matt Dillon fan, but I thought he was fine as Robbie. My problem with the character is that he was so obviously not right for Claire that there was no real danger of Phil thinking Claire might actually want Robbie instead. If I was the writer (and thank the good Lord that I am not), I would have written the character as a more dashing guy who makes Jay fumble around and be his awkward self. He can be reassured at the end that Claire loves him for who he is. Now, perhaps that story is a bit obvious (and a good reason why I am not a comedy writer), but it’s more plausible and has more humor potential than the story that made it into the episode. Yes, Dee making out with Robbie was funny, but it was a one-note funny.

All in all, it felt to me like all of the stories were half-formed. There was a bit of Phil possibly being threatened by Robbie, but not really. We had a little bit of Fizbo, but not enough. Gloria was sort of loopy on the Xananx, but really not that out of control. Yes, in many cases, less can be more, but when a show is bringing back its funniest gag ever, it needs to go all the way. 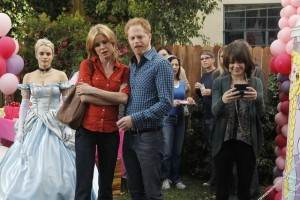 Now, as this is still Modern Family, regardless of how “good” it was, there were still a number of great lines. Here are some of my favorites from this week:

Phil: Now, we know when Nana DeeDee comes to visit your mom can get a little…
Haley: Psycho.
Luke: Scary.
Alex: Drunk.
Phil: All true.

(After Gloria does her bear impression)
Jay: What kind of voice was that?!?
Gloria: A bear!
Jay: A bear? I was going to go get a crucifix.

Mitchell: Stop eyeing the princess, you’re going to freak her out.
Cameron: I don’t know. I think the whole idea of needing a prince to come along to make you happy sends the wrong message, Mitchell. I really do.
Mitchell: Really, and a grown man pulling boxer shorts out of his mouth doesn’t?

That last line really slayed me, actually. What did you think of the episode? Were you disappointed like I was? Did you want, nay crave, more Fizbo? Did Matt Dillon and Shelley Long work for you? Please leave your comments below. I’ll be back next week with another review. Until then, I’m off to respect party themes. Never break character!!

P.S. It’s certainly helpful to be on the network Disney owns when you need rights to a princess character, right?