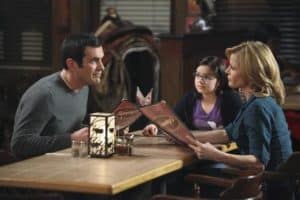 If you missed last week’s return of Fizbo, catch up with my review here.

This week’s episode centered around, as was plainly stated in Jay’s concluding voiceover (which I didn’t hate! See why below), the need for married couples to listen to each other. Phil, Mitchell and Jay all had their own problems listening to their spouses, and each had to deal with the consequences. As a karaoke fan (my “Love Shack” was well known in the Brookline area of Boston from 1999-2000), I actually enjoyed the Jay/Gloria story the best (it had by far the best line of the night, as described below), but there was enough in the other two stories that made me enjoy “Regrets Only” more than last week’s “Princess Party,” even if it wasn’t a great episode.

“Mistaken communications” is a common trope of every type of storytelling, whether it be a play, drama, musical, movie or sitcom. This genre of story doesn’t need to be solely a situation where one person mishears or misinterprets what another person says (like the “Telephone” game), but could be a situation where someone just misunderstands what is being communicated to him or her. That is the situation here for both Phil and Mitchell. Neither man takes great care in listening to exactly what his spouse says, leading to both of them really disappointing their significant others. Again, this isn’t a particularly novel idea, so the execution must be excellent to make the stories stand out. While I was certainly entertained by these plots (I especially liked Phil and Claire’s fire extinguisher fight), I was more pleased than really moved comedically. On the other hand, Jay’s inability to physically listen to Gloria’s karaoke screachings was a nice departure from the standard trope. Of course, this was not the first time a television character couldn’t stand another’s singing, but when portrayed against the other two, more typical stories, the karaoke plot was a nice contrast. Besides, Sofia Vergara’s warbling was the comedy gift that kept on giving. 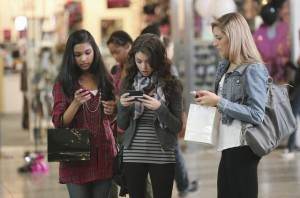 Now, I did this this episode was better than last week’s offering. “Princess Party” felt manic, with everyone’s neuroses turned up to eleven. “Regrets Only,” however, felt more madcap. I thought the physical comedy was at an apex for the season. From Phil and Claire’s aforementioned kitchen fight with broccoli and a fire extinguisher, to Gloria’s dance steps while singing, to Claire’s massage grunting, to Luke and Cameron’s headsets, I found a lot of energetic humor in what I was seeing throughout the episode, and I enjoyed it. Also, and in a bit of a surprise, I actually thought Jay’s voiceover worked really well this episode. One, it’s been a while since the show has employed this bit, so it felt a bit fresher, but what really sold me was the way in which it arose. Usually, the voiceovers, which are always accompanied by music, just start, with music (which is never a apart of the rest of the show) suddenly swelling. In this episode, Cameron actually called out the harpists for not underscoring his, and the episode’s, emotional moment. The music started, and Jay’s voiceover followed. This introduction into the voiceover was a very sly, and very effective, way to use this otherwise ineffectual (in my opinion) element.

Of course, while the physical comedy was quite funny, it’s the dialogue that we most remember. So, here are a few of the episode’s highlights:

Phil: Claire, about the mall, I was going to run out and get my haircut this afternoon.
Jay: Well, now, hang on here. Why don’t I run Claire down to the mall, and you [Gloria] give Phil a haircut. You’re always talking about how you miss working at the salon.
Gloria: I guess I could. I do Jay. Why can’t I do you?
Phil: Y-y-you can…do…me.

Luke: Are you going to get upset and eat all the appetizers again?
Cameron: It is amazing what you notice and what you don’t notice. (Cameron points to Luke’s open fly.)
Luke: Come on, Luke! 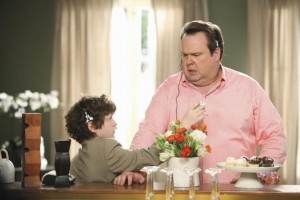 Manny: You know I stopped by the restaurant and Haley wasn’t there.
Alex: When?
Manny: Uh…I don’t remember. I was there for a movie.
Alex: Think! I need details!
Manny: OK, it was a romantic comedy my now ex-friend Reuben recommended….

Claire: Well, since when do you shy away from confrontation? Mr. Tough Talk. Mr. Straight Shooter. Getting a little soft, Grandpa?
Jay: Do you know that when you get a massage you sound like a Tijuana prostitute?

Jay is singing “Danny Boy.” The power in the karaoke machine dies. Jay turns to find Manny holding the cord.
Manny: You keep this up, and this won’t be the last plug I pull.”

That, my friends, was the funniest line of the night. Well-played, Rico Rodriguez.

So, that’s what I have for “Regrets Only,” a pleasant, if not outstanding, episode. What did you think? Could you listen to more of Gloria’s musical stylings? Do you appreciate how Haley always seems to get away with whatever stunt she is pulling? (Personally, I loved that she got out of her sticky situation with the job.) Do you know how to properly align chairs? Please leave your comments below. I have a prior engagement that will preclude me from writing a review of next week’s episode so my illustrious colleague, Jordan Cramer, will be subbing for me. Treat him well. I’ll be back a couple weeks later when new episodes return. Until then, I’m off to change my Forestry major.