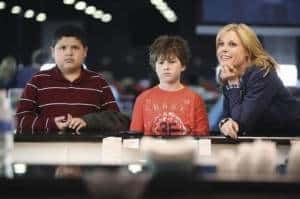 First, let me apologize for not writing up last week’s rather funny episode “Mother’s Day.” My wife and I were across the continent in San Diego celebrating our impending parenthood, but I thought it was one of the strongest episodes of the season.

“Good Cop Bad Dog,” on the other hand, was not. It by no means was a “bad” episode. Far from it. It just felt like this was a middle-of-the-road episode with a number of good jokes, but nothing that had me guffawing or rollicking with laughter. Like most of the Modern Family episodes I don’t find reach the show’s admittedly high, self-imposed standards, I really liked the Dunphy storylines, thought the Mitchell/Cameron story was funny, and felt the Jay/Gloria story was the weakest of the three.

As I have noted a number of times throughout the season (although more frequently in the fall), the mark of a great show, to me, is when the characters evolve during the course of the series. I voiced concern that Modern Family didn’t appear to be sending its characters on any type of journey or having them learn anything. Now, Phil and Claire returned to the people they were at the beginning of the episode (good cop and bad cop, respectively), but their experiment in the opposite role was a nice bit of character development that I hope rears its head going forward. Seeing Ty Burrell’s “serious” face when he was supervising cleanup of the bathroom and duct taping the girls’ laptop closed was probably the biggest laugh of the night. Similarly, seeing Julie Bowen bring her frantic energy to being “fun,” and actually torturing her son and stepbrother in the process, was equally hilarious. Both actors had the opportunity to stretch their legs a little and it was well appreciated. 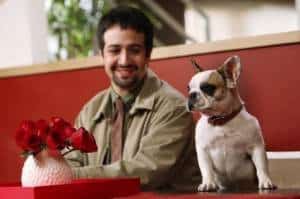 The other plots weren’t as successful, but there was enough physical humor in the Mitchell/Cameron story to keep me well entertained. The sight of Cameron carrying Mitchell was fantastic, but I thought the whole plot was played too quickly — I would have loved the opportunity to sit in that story for a bit longer. Unfortunately, in order to work in all three stories (and actually four if you take the Phil and Claire stories separately), something has to be sacrificed. This week, it was a chance to really dig a bit deeper into the comedy of Mitchell and Cameron’s situation. Over at the Pritchett home, I was just, kind of, well, bored. I am a huge fan of Lin-Manuel Miranda, who played Guillermo, and I thought he was perfectly fine in the role of Gloria’s charity case. While I liked the resolution of Jay bringing home the dog, I just didn’t feel any kind of liftoff from the story. Not every moment can be comedy gold.

So, all in all, an entertaining episode, but not one to write home about. I didn’t even find enough great lines of dialogue that would warrant inclusion in my usual “Best Lines” section to have such a section in this review (well, other than a couple Luke lines, of course: “After what she said to Manny, I didn’t want to risk it.” and “I’m twelve. I need limits!”). What did you think of the episode? Did I miss some big laughs? Was this one of your favorite episodes? Do you think we’ll see Phil and Claire keep any of the knowledge they gained switching parental roles? Please leave your comments below. There are two new episodes remaining this season. Can they match the fabulous One-Two combo of last season’s “Hawaii” and “Family Photo”? I hope so, and of course, I’ll be back with reviews of those episodes. Until then, I’m off to poke the bear.