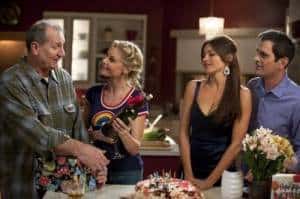 As I mentioned last week, Modern Family had a lot to live up to over its final two episodes if it wanted to match the heights it did over the same period last season. Last week’s episode certainly matched “Hawaii” for its sheer comedy quotient — both episodes were some of the funniest of the series. Similarly, “The One That Got Away” matched “Family Portrait” not only in the comedy department, but also with an unabashed sentimentality about what it means to be a family. Of course, this is the general theme of the entire series, but what the finale is able to accomplish in this area is something I have wanted from the series all season: real character growth.

Each of the adult characters (except perhaps Gloria, who had her own character growth moment in the school dance episode) was shown coming to a realization that they have not appreciated a certain aspect of their family. Cameron and Mitchell realize that being parents is a blessing, and that they want the opportunity to guide the life of another child and give him (because they want a boy) the great experiences they had as children. Jay admits that the “old Jay” would have done nothing but complain that he didn’t get the birthday he wanted (namely, being alone), but Jay has become more understanding since he married Gloria. He is willing to take everything in stride, but more importantly, he can recognize and enjoy the simple gesture of Manny floating Jay’s boat in the pool…at night…without any fishing poles…or fish, for that matter.

Finally, Phil learns the biggest lesson of all: appreciating his wife. The series has earned great mileage out of Phil’s not-so-subtle lusting after Gloria, but his conversation with his old rival helps him realize that he really does have everything he could want in a wife: someone who is funny, smart, and of course, gorgeous. Claire has never really reprimanded Phil for his stares and comments (the occasional head slap aside), which is key to his realization of Claire’s importance. This is actually a rather big moment in the series. Of course, I don’t think they will abandon Phil’s innocent infatuation with Gloria, mostly because it is so darn funny, but I do believe (hope?) the writers will use this moment as a benchmark for Phil going forward.

All of this great character development aside, “The One That Got Away” was also just a great episode of Modern Family. It had plenty of great lines, some really funny physical comedy, and as mentioned above, some very effective sentimentality (I also loved the “clips” of previous episodes that the kids had taped over the course of the year for Jay’s video). Season One was a near perfect season of television comedy. Most of this was due to the incredible talent of the writers, directors, actors and everyone else involved in the production. Some of the show’s success that first season, however, was due to the novelty of the series — it had been quite some time since a family sit-com had been so well-done and was so well-received by a large audience. It was going to be almost impossible for the show to live up that success in its second season, mostly due to the lack of novelty. 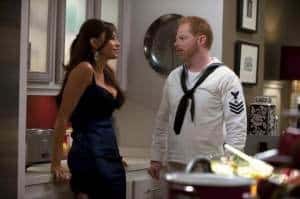 Now, do I believe Season Two was as successful as Season One? No, I do not. There were times the show seemed to lose its way a bit, namely during the middle part of the season around “Chirp” and including the episodes with dubious jokes using racial humor. Once the season hit Valentine’s Day, however, the show jumped out of its (shallow) rut and started resembling the Modern Family we loved in its first year. The best episodes of Season Two matched the best of Season One (“Manny Get Your Gun” may have been the best episode of the series to date); it just seemed to lack the consistency the first season did. This is normal for any successful series, but with the run of episodes leading up to the finale, and the character development that occurred during them, I am eagerly anticipating what the folks at Modern Family have in store for us in Season Three.

Before we finish up the season, however, we have to take a look at the best lines of the episode:

Gloria: So that’s really going to be your day? You’re going fishing?
Jay: With time out for a gourmet lunch: Sausage of the Month Club really nailed it in May. But Honey, no offense, they almost lost me last month with that chorizo.
Gloria: Why “no offense”? It’s a sausage. It’s not on our flag.

Jay (to the dog groomer): Yeah, I did blame her for no reason….You have a bit of an attitude, you know that? You know who did your job in my day? A hose!

Cameron: I’m sorry to ask you to get your own birthday cake, but I can’t get a hold of anyone else.
Jay: I can’t do it. I’m on my way to the lake…finally. Just get some at the grocery store.
Cameron: I am not getting you a grocery store cake. Gloria asked me to handle this. She’s going to kill me. She can be mean in Spanish!

And of course, the last word has to go to my favorite character:

Claire: OK, everybody upstairs, and Luke, I want you to get in a hot bath right away.
Luke: I’m still shivering.
Alex: This is why you don’t stand up in a boat.
Luke: I was King of the World!

Alright folks. That is is Season Two of Modern Family. What did you think of the finale? What did you think of the season? How do you think it ranked compared to Season One? Did you like the character developments shown in these last couple episodes? What about Cameron and Mitchell’s decision to have another child? What types of stories would you like to see them tackle next season? Please drop your comments down below. If there is any news on Modern Family or any of your other favorite shows during the summer, you can be sure TVOvermind will have it, so bookmark the home page, and follow us on Twitter to make sure you are up to date on all the TV news. I will be back next season with more reviews of Modern Family. Until then, I’m off to use a tennis racquet as a bubble bath frother.