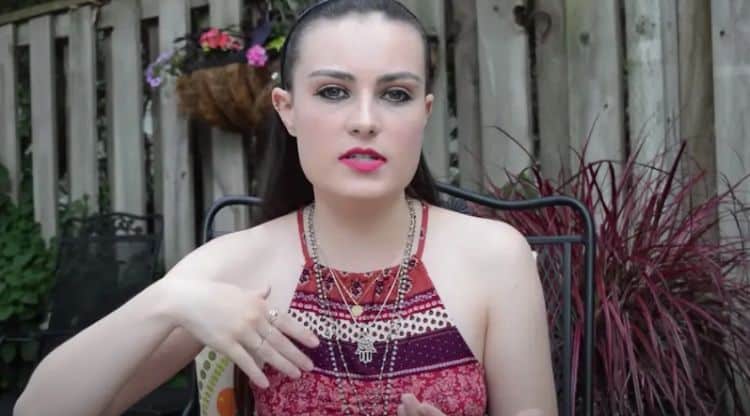 Since starting her YouTube channel in 2014, Molly has built a massive following of over two million people. When she started posting videos on the platform, she had no idea that she would eventually become as big as she is today. Despite being diagnosed with a condition called Retinitis Pigmentosa when she was just 4-years-old which caused her to lose her sight, Molly has continued to defy the odds and she is focused on making her life as full as possible. Her message of positivity and her desire to bring joy to others has become what many of her subscribers love most about her. Continue reading for 10 things you didn’t know about Molly Burke.

1. She Started Public Speaking When She Was 5

Molly has always been passionate about sharing her story with the world. At just 5-years-old, when other kids her age were only focused on nap time, Molly had already started a public speaking career that eventually resulted in her touring places all over the world.

2. She Released An Audiobook

Molly has an impressive list of accomplishments, and now she can add that she’s an author. In 2019, she released an audiobook titled, It’s Not What It Looks Like. The book discusses Molly’s story and provides in depth insight on how she has refused to let the loss of her sight hold her back.

Even though Molly was diagnosed with Retinitis Pigmentosa when she was a young child, she didn’t lose her sight right away. At first, she struggled to see in dark or dimly lit environment, and then she lost the ability to see color. By the time she was 14-years-old, she was completely blind although her eyes can still detect light.

When people talk about Molly’s YouTube channel, they often marvel at the fact that she has over two million subscribers. What’s even more impressive about her channel, though, is the fact that it has well over 165 million views. There’s no doubt that that number will reach 200 million soon.

5. She No Longer Wants A Cure For Her Disease

After being diagnosed with Retinitis Pigmentosa, Molly spent years wishing there was a cure for her illness. However, she no longer feels that way. She said, “I was surrounded by the idea of a cure my whole life…I don’t even want to be cured now.” She also said, “I came to realize that I’m not broken at all. I can live a fulfilled and happy life as a blind person. The real problem is inaccessibility and the way the world views disabled.”

In addition to the stress she’s had to deal with over losing her sight, Molly has also had to put up with people bullying her behind it. Even before she opened up her life to the world by starting a YouTube channel, Molly had dealt with years of bullying from her peers.

Lots of people assume that Molly can’t do much because of her blindness, but that isn’t the case at all. Molly is a very active person and she loves to try new things. She is capable of doing anything she puts her mind to and enjoys activities such as skiing and swimming.

8. She Has A Boyfriend

Let’s face it, trying to date in 2020 isn’t easy for anyone. With that being said, things are exponentially harder for people who don’t fit what is considered to be the norm. Because of this, Molly has had to deal with lots of disappointments in her romantic life, however, it looks like those days are over. Molly recently revealed that she is in a relationship with a man named Adrian.

Mental health isn’t something that lots of people are comfortable talking about, but Molly has decided to open about her struggles with the hopes of helping other people. During her teenage years, Molly dealt with depression and anxiety. She said, “My road to recovery wasn’t quick or easy and there’s no one thing I can say helped me manage my battle with mental health. It was a combination of my family, new friends, a team of professionals and eventually, my drive within, that helped me through. I went to a wonderful psychologist who I really connected with and trusted. I also looked at therapy as a package, working on my emotional and physical health as well.”

10. She Has Some Good Advice For Up And Coming YouTubers

Building a successful following on YouTube isn’t easy, and it’s only going to get harder as more and more people flock to the platform. When asked if she had any advice for up and coming YouTubers, Molly said the answer is simple: commitment. She believes that creators should be ready to go all in once they decide to start a channel.