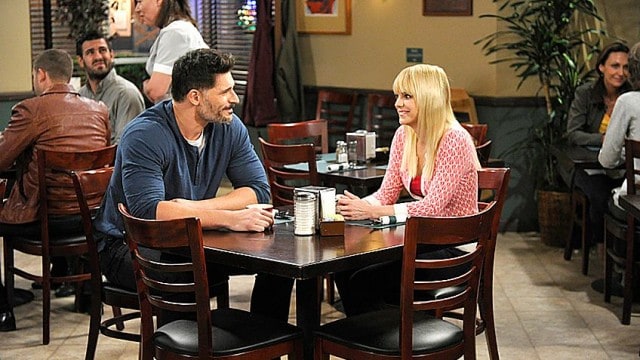 MomÂ is probably the least guest-star laden comedy on CBS’s network; with such a wide palette of personalities and people integrated into its own world, it doesn’t really need them. But when it does have them, it usually puts them to very good use – and surprisingly, man hunk Joe Manganiello follows in the tradition of Colin Hanks, Judy Greer, and Justin Long before him, offering a splashy guest star that doesn’t force itself on the narrative, rather integrating them with grace and meaning, which creates an entire new world of possibility for CBS’s best show.

Sure, Joe Manganiello’s muscular Julian may never appear onÂ MomÂ ever again; but the story they tell in “Cinderella and a Drunk MacGyver” with him is another one ofÂ Mom‘s brief, touching stories. And it’s solely because of Manganiello’s grounded, subdued performance as Julian: on the surface, his character is really an archetype of the man who ruined his life drinking. I mean, his origin story is literally him saying “I lost my wife, my job, and my family”, a story “Cinderella” only expands on to draw connection between him and Christy (that is, Julian’s daughter told her father she didn’t want to see him on her birthday, driving him to get sober).

Even the story with Christy isn’t anything particularly fresh; multiple times in the past we’ve seen Christy not pursue something with a guy because of where her or her potential partner may be in life; after rebounding from alcoholism by having an affair with a married man, Christy’s learned her proclivity towards broken people like herself can be dangerous. So her turning away Julian’s brief romantic advances is not surprising, or eye-opening; if anything, it’s reassuring, a reminder that the writers ofÂ MomÂ are dedicated to their characters, never letting plot or ratings or guest stars dictate how the personalities of their characters evolve or transform (as we’ve seen, evenÂ MomÂ is willing to let go of stories that work; notice howÂ MomÂ is no longerÂ solelyÂ focused onÂ Christy’s biological family or career).

Of course, the idea of Julian having a family he needs to reconcile with leaves the door open for his potential return, shouldÂ MomÂ ever be interested in such a thing (the womens-only AA meeting he walks into certainly seems intrigued by the idea of him as a recurring character). And they should be; Julian’s inner conflicts offerÂ MomÂ a male voice it hasn’t had in awhile, one it can both treat as eye candy (a wonderful flip on the trope of the “sexy guest star”, I might add), and as an actual character, one whose journey closely mirrors the beginning of Christy’s own, an early part of her recovery we actually never saw.

Then again, this is thinking in hypotheticals; in the present, “Cinderella” is a perfectly enjoyable episode that never strays far from its central themes of growth and staying strong in the face of tough decisions. Doubling the pleasure of the show’s usual rhythms was the re-emergence of Jill, a character who has disappointingly been relegated to the background for the majority of season three. Jill’s been a character it feels likeÂ MomÂ is right on the edge of actuallyÂ getting, flirting around the idea of a three-dimensional woman learning to be grounded despite her elitist personality, and “Cinderella” is another example ofÂ MomÂ almost getting there with her character, but never pushing deep enough to take a real hold. Seeing Jill confront her old rich people cronies feels like 85% of a story; there’s a thread of something good with the irony of her ruining the party while sober, but the negative attention she receives for arriving and her subsequent reaction doesn’t quite feel like the whole picture (how come nobody mentions her ex-husband, for example?), despite being wonderfully performed by Jamie Pressly and Allison Janney (in two baller gowns, I might add).

However, “Cinderella and Drunk MacGyver” is only disappointing in the moments where it secedes its ambitions to its role as a network sitcom; when operating within the normal bounds of comedy (and make no mistake; this is the most joke-laden episode of the season, despite the subject matter of Julian’s introduction),Â MomÂ offers another reminder of why its such a master class of the genre, using the arcetypal situations and conflicts of broader network sitcoms, but attaching those ideas to the fully-formed characters at the show’s core. In other words, it’s just another day at the office forÂ Mom, delivering an episode that’s pleasant and meaningful, without ever feeling the need to present itself as something “special”, either because of its guest star or topic matter – how can one not love this show?

Everyone’s ogling at guest star Joe Manganiello in another terrific episode of Mom.