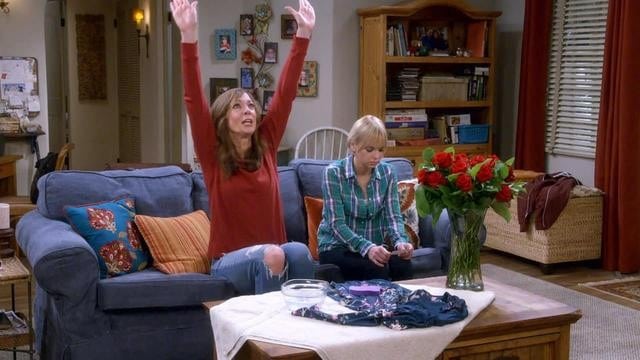 With Roscoe moving into Baxter and Candace’s house, it seemed only a matter of time before the two young matriarchs in Roscoe’s life butted heads; after all, Candace is the woman who turned Baxter’s life around, transforming the deadbeat pot dealer into a well-groomed car salesman (and high-end pot dealer). And yet, how the inevitable clash between Candace and Christy finally rises to the surface in “Snickerdoodle and a Nip Slip” isn’t really formed around Roscoe at all – it’s formed around Candace’s father Fred, who becomes smitten with Christy – and leadsÂ MomÂ down another interesting, multi-episode story path.

It’s always clearÂ MomÂ is heading towards an important Christy or Bonnie story when most of the secondary players fall out of the picture: and with no sign of the support group, restaurant crew, or the random people Bonnie runs over in her daily life, “Snickerdoodle” announces its priorities pretty early, doubling down on the double-edged comments Candace is always sneaking in at Christy, even while she tries to purport she’s building an important friendship with Christy, to better the life of the child they all care so dearly about.Â As civil as the two are on the surface to each other, there’s always been dissent bubbling below the surface; Christy because she transformed Baxter into a useful member of society, and Candace because she’s never going to have the clean family life she always wanted – Christy is a “complication” she’ll never be able to rid herself of, so why not try to turn that into something beneficial for her?

Of course, the complicated relationship Christy and Candace have goes beyond the men in their lives; as someone who grew up wealthy, Candace naturally finds herself as someone Christy would resent, a woman who could give Roscoe all the things she couldn’t in his younger years, right down to three fresh, prepared meals a day. To Christy, Candace’s life seems beyond the realm of possibility for Christy,Â inherent jealousies built right into the foundation of their already-shaky relationship. It’s a river that runs both ways, too; when Candace’s father develops a crush on Christy (which she initially resists), Candace doesn’t see it as her trying to infiltrate her family; she sees it as Christy trying to take her father’s money, and “better her own situation”.

Just how toxic their pretend friendship is comes to light when Candace comes knocking before Christy agrees to go out with Fred. In anger, she tells Christy that she “always knew [Christy] was jealous of me – but I was taught to be tolerant of the less fortunate”, a dark turn in an argument onlyÂ MomÂ knows how to handle gracefully. It’s not a line the show dwells on, but for a moment, it pulls back the curtain on the fake smiles these two women (plus Bonnie) put on for each other, and gives voice to the deep rift between these two, and just how far away they are from co-parenting in a peaceful, successful way.

Christy doesn’t make things easier when she agrees to go out with Fred, obviously – but after that comment, can you blame her? If there’s one thing Christy won’t be told, it’s how much lesser she is than anyone: after all, with two jobs (three if you count AA work) and a student workload, Christy’s attempts to better her own life can’t be brought into question. And that’s where the episode falls out of balance a bit:Â MomÂ can’t help but make Candace an antagonist in this story, even though she’s really done nothing wrong, save for her slightly elitist attitude sometimes – but she really needs to be for this story to have a dramatic arc (Bonnie, with all her materialistic ranting, is too beside herself to cause any real conflict), and that kind of sucks the air out of her character a bit. She gets real nasty here; andÂ Mom,Â at least in this half hour, doesn’t hold Christy to the same judgment (her feelings for Fred make the whole “dating your dad to piss you off” thing a little more empathetic), which tips the narrative scales a bit in her favor.

This story isn’t over, though, and I fully expectÂ MomÂ to deliver a balanced, meaningful resolution to this story, which is a nice shift from the extremely dark AA story linesÂ MomÂ has opened its third season with (and closed its second, honestly). The recent attention on Violet and Baxter has broughtÂ MomÂ back to its familial roots a bit – and as much as I enjoy Marjorie, Jill and Jodi, stories with extreme focus on the Plunkett family are always the show’s best. I hesitate to call “Snickerdoodle” among Mom‘s best – but it’s close, setting the table for what looks to be a dramatic conclusion.

Mom finally digs into the Candace/Christy dynamic in another terrific, hilarious episode.