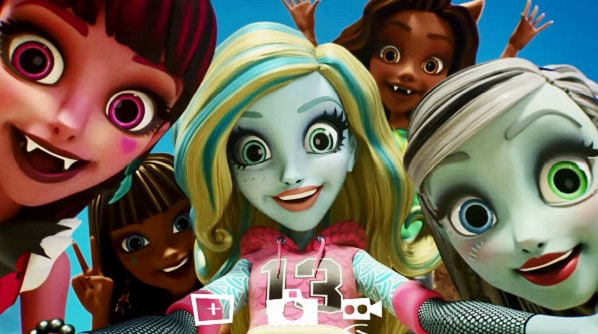 The Monster High movies are something that was developed for young kids, girls especially, that has a more dark, goth look to it while still being able to remain upbeat and entertaining for the kids. The idea is one that might make some people roll their eyes since the idea of putting monsters into absolutely everything has been done and redone for the past decade and more, but this idea was actually well-received when it first came out and the buzz around it was something quite positive. While the whole idea of including monsters into a story and in essence making the story about them in a cute, endearing way is enough to cause some people to say “here we go again” there were kids that really liked it and fell over themselves trying to get the movies and the toys. Monsters are after all a rather fun and popular bunch when it comes to many forms of entertainment. Just because it seems a tad bit cute and cuddly for some folks doesn’t mean it won’t be highly entertaining for others.

Here’s a few things you might not have known about the movies.

10. Obviously the characters are all inspired by movie monsters.

From Frankenstein’s monster to the daughter of the creature from the Black Lagoon, all the most popular characters are female as you can see, and they all conform to one classic movie monster or another.

9. The movies are based around the popular toy line.

Or vice versa, it’s hard to tell really since they came out in the same year. But the idea is that they compliment one another in a big way so it shouldn’t really matter which one was out to the public first. A lot of times it’s the toys as they can help to hype up the movie a bit, but there have been moments when the movie comes out slightly ahead of the toys. It’s not all that common though, at least it hasn’t been for a while.

8. All the movies have been direct-to-DVD.

So far this hasn’t been the biggest thing running when it comes to animated films, so the big screen has not been an option. You never know what might happen however, eventually Monster High might make it to the big screen for at least one film.

7. The females are Ghouls and the males are Mansters.

You’d almost expect the Boys to be called Boils, but then that might be kind of awkward so Mansters seems to work a little better. Some might complain about the gender stereotypes that seem to be implicit in the names, but to be honest it’s a kids’ show, so there shouldn’t be a lot of talk going on.

6. The creators came up with the idea by watching girls shopping at the mall.

They took note of what girls were buying and noticed that a lot of goth stuff was extremely popular during this time, so their minds got to working over what could be seen as popular on their show and voila. Monster High took a little developing obviously but it was still enough of a jump start for them to think that it would play out in a positive manner.

5. In 2016 the toy line had to be rebooted to offer a more pleasing look for children.

Apparently the original toys were a bit too aggressive in their make and had to be toned down so that they were deemed more appropriate for kids.

4. There are fans of all ages of the toy line.

One doesn’t have to be a kid to be into the toys or the movies to be honest. But the toys have also produced some limited edition models and one of a kind models as well, so it’s been seen that older fans have managed to get into this franchise.

3. There are video games and books dedicated to the series as well.

For a while Monster High was truly doing awesome. It would seem that the franchise has kind of slowed down at this point, but you can still see the influence it’s had on the public and how much people, kids mostly, are still into it. There’s a good chance that it might see a resurgence and become another beloved series that will continue to rise as each new generation grows up.

2. The toys created a great deal of competition as other companies tried to cash in on the trend.

Several companies did their best to emulate Monster High, trying to mirror their success by creating monstrous versions of their own existing toy lines. It kind of came off as an obvious attempt to copy everything they were doing.

1. The fictional high school is located in the town of Salem.

Salem of course is the perfect setting since it’s been considered a hot spot for monster movies in the past and has a historical reputation that, fictional or not, people love to ponder over.

For a kids show it’s not that bad.