Home
Anime
Will We Ever See a Monster Musume Season 2? 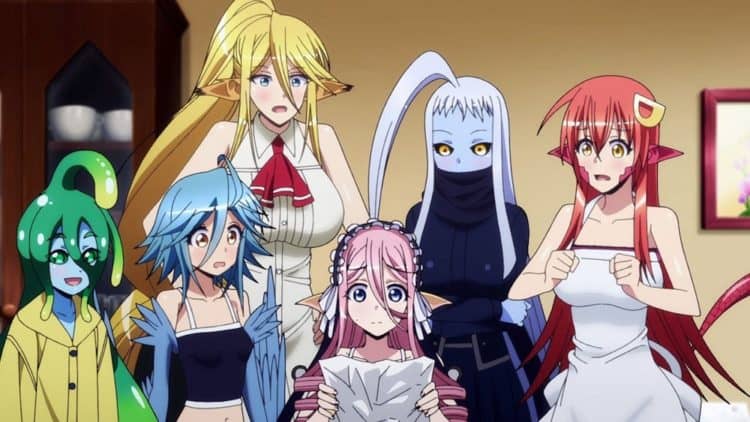 The first season of Monster Musume was released, way back in 2015, it was the talk of the town. The show had a lovely script with plot lines and character arcs that were not only gripping but also very entertaining. It should come as no surprise then that the show ended up being a huge success, with millions of fans all over the world. Having created such a huge wave of popularity, it comes as a surprise then that the show, for what has now been six years since it began to air, has never had a second season. This has raised a lot of questions when it comes to anime fans in general and Monster Musume fans in particular. So, Will We Ever See a Monster Musume Season 2?

A young and poor Kimihito Kurusu, as a result of the Interspecies Cultural Exchange Act, is beset by mythical creatures, all-female, and is ordered to take care of them. Although he did not volunteer for the program, he also did not have the heart to back away from the first mistaken delivery, a lamia by the name Miia. As time went on, he also took on some more liminals, which included a centaur, a harpy, and a mermaid. According to the act, all the guardians are required to make sure that the liminals are taken care of, and that no harm happens to them. Moreover, the guardians are also to make sure that they, or any other person, do not infringe the purity of the liminals. If any guardian is found to have broken any of the said rules, then they are to be arrested, and the liminals deported. The plot does get a twist later when it happens that Kimihito is to be the test subject to marry one of the mythical creatures.

It is a gripping tale that in many ways embodies today’s society, and it is easy to see why so many people became not just fans, but fanatics of the series, as short as it was. When it comes to anime series and seasons, it is not uncommon to find that there are long hiatus between seasons. Thus, the six or so years that the series has been away should not come as much of a surprise. That being said, this hasn’t prevented fans and fanatics of the show to speculate as to whether the show is actually coming back or not, and if the answer is the former, when is it going to happen. As a result, there has been a lot of rumors going around, and this article’s raison d’aitre is to filter or try to distinguish the truth from the false.

Speculation as to the release date of the second season started way back in 2015, while the show was still airing. In Episode 12 of the series, at around minute 16, according to Crunchyroll, some words appear as the characters are taking a shopping trip. These words can be translated to ‘phase two decision’, which many fans believe to refereeing to the second season of the show. That is not such a farfetched theory. It does allude to the fact that the plot is very likely to continue. That being said, there has been a lot of conflicting information that has reached the fans. Some of the sources say that the show is not likely to be renewed, while others go as far as to confirm that the show is coming back.

An example of this contradiction can be seen when, in late 2020, according to TechRadar247, the show had not been renewed, and that, in fact, it was far from being so. However, in February of 2021, according to ASAP Land, the series had been renewed. There are several sites that still predict that the series will go on. The show is likely to make a return in mid-2021, though they do not have any real information to back this claim up. With the advent of the COVID-19 pandemic that the certainty not only of television shows but also of the art world, in general, has been put in jeopardy. That being said, there are a plethora of sites and publications that are still optimistic about the show’s return, and fans are more hopeful than ever that the show will return.

The cast of Monster Musume Season 2

It is more than likely that the voice actors that played the recurrent characters in the series will return. Junji Majima played Kimihoto, Ari Ozawa was Papi, Sora Amamiya was Miia Yû Kobayashi was Ms. Smith, and Natsuki Aikawa was Centorea. There was also an English version to the series, with actors such as Bryson Baugus as Kimihito, Molly Searcy as Cerea, Allison Sumrall as Miia, Shelley Calene-Black as Ms. Smith, and Brittney Karbowski as Papi. Even though the likelihood, as stated earlier, of the said actors returning to their roles is high, it is still not known whether they will do so. Even though it is not unusual for anime series to take such long breaks, the longer the break, the more likely that there will be changes, and the more drastic the said changes will be.

The plot for the second season

The manga for the show has continued to be published, even though it also has had several hiatuses through the years. according to Anime News Network , the said breaks are in place in order for a compilation to be created, and also so that the series creator, Okayado, can take some breaks. Since the first season itself covered about 25 chapters, which is in itself a couple of volumes, it means that there will be plenty of content and material for the coming season. The reason why the series combined so many volumes is so that the show can focus on the characterization of the show rather than the plot progression. You can be assured that for the second season, the battle between the liminals in order to marry Kimihito will heat up. Moreover, you can be assured that monster girls from other regions will show up, perhaps to even compete for Kimihito. If the show is to continue, you can be sure that it will not acquiesce when it comes to characterization and cinematic beauty.