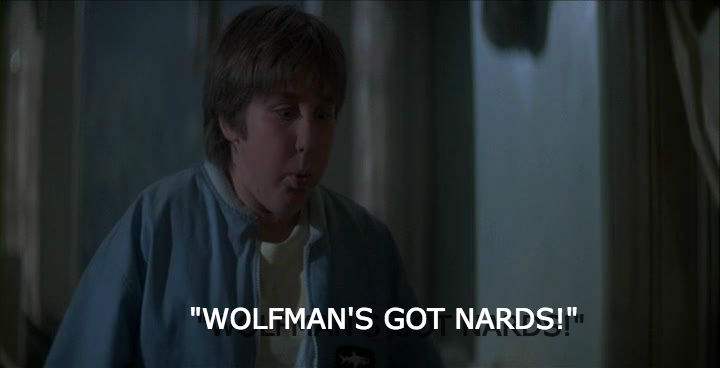 You would kind of think that the term Wolf ‘man’ would allude to the creature having nards, but then again, the thinking of a kid could be different enough that one could be convinced that a monster doesn’t have the same anatomy as a regular human being. You might also be asking what the heck the Monster Squad is, but if you are then you’re likely too young to remember when this movie came out back in 1987 when a lot of us were kids and some of those just learning about it weren’t even born yet. Let’s save the suspense and state the obvious, it’s a corny movie that was made for kids since the implications of it are pretty cheesy, as are the effects and the overall feel of it. But the story is definitely fun since it involves a battle of immortals as the famed Van Helsing battles Dracula and seeks to send him and the other monsters to the void. There are a few sympathetic moments since Frankenstein’s monster is shown as a protagonist instead of an antagonist like the other monsters, and the Wolfman is in absolute misery when he’s in his human form since he’s not enjoying his ability to turn into a monster. But Dracula is a pretty big jerk in this movie and the Mummy and Creature from the lagoon, I won’t use the whole title since there are some noted differences, are pure evil and intent on causing mayhem.

The whole scene with the Wolfman’s nards is pretty standard of what you might see in a movie made for adolescents or kids since thinking that the Wolfman might not have the same anatomy is funny, but finding out that he does is even funnier since it allows the kids to make their getaway at that moment. There are plenty of other scenes in the movie that are just as ridiculous since Dracula is actually fended off by slapping a piece of pizza with extra garlic to his face at one point. It was a movie for kids, and it was one that a lot of people didn’t feel would go that far, and to be fair it didn’t since there was no chance of a sequel, and most of the actors kind of fell off the map after this movie as time went on. Just making a movie appearance in the 80s didn’t mean much since a lot of folks went on to have a short stint in the movies without doing anything truly significant. But think that this movie would ever get mentioned again was more or less a given since it didn’t attract the kind of attention that other movies tend to.

But somehow, someway, and somewhere along the line, the Monster Squad did start getting noticed by other people as the movie has gained a good deal of attention in the past several years and has even inspired people to come together because of it. Obviously coming together right now has to be done in a virtual sense more often, but the fact that more and more people have been turned on to Monster Squad is a great deal of fun that a lot of people likely never saw coming. There’s something strange about cheesy movies that can bring people together, but in this case, it’s not that hard to figure out since the Monster Squad was a part of a lot of peoples’ childhood and became one of the movies that a lot of us would ask our parents to rent every time we went to the movie store. Remember those? This is how far back the movie goes when movie stores were still around and doing great business, VHS was the big thing and movies hadn’t yet hit the DVD stage since they wouldn’t really become that popular until the late 90s. These were the days when people had to actually rewind a movie to get to the part they wanted to see again and again, and you can imagine that some of us wanted to watch this movie over and over since it was one of those that was so bad it was good.

“Wolfman’s got nards!” is actually one of the best lines of the 80s to be certain, even if a lot of people might still look at you funny for saying it, at least until it’s explained. Some might not get the movie, some might not like it, but those that grew up with it are those that look back and remember the fun that was had with it since of course it’s a bit ridiculous given all the monster movies that have come out since then, but it was fun at the time and it was enough to keep us entertained, and that’s all we needed.