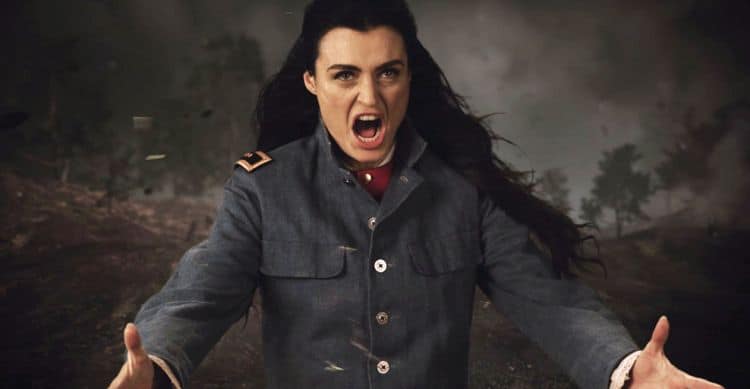 The show can be considered an example of alternative history, which encompasses works in which different circumstances have brought about a very different “history” from that of the real world. Some people might assume that alternative history works are very grounded in real history. However, there is a huge subset of altenative history works that are perfectly willing to embrace both fantasy and science fiction elements, which can make for rather spectacular results.

2. There Are a Couple of Important Points of Divergence

From the premise, it is clear that Motherland: Fort Salem has a couple of important points of divergence. One, there are real witches with real powers. Two, these witches signed some kind of pact with the U.S. military to serve as weapons in exchange for an end to the Salem witch trials.

3. The Belief in Witches Is Very Common

4. Witch-Hunts Are Very Common As Well

Unfortunately, the belief in witches means that the belief in witch-hunts has been very common as well. However, it should be mentioned that witch-hunts weren’t particularly common in the medieval era, not least because the belief in witchcraft was considered to be heretical because witchcraft could not exist under the Christian doctrine of those times. Instead, the period that people associate with witch-hunts was the early modern era, which was made possible to an extent by how occultism had become a subject of interest to the educated classes in the Renaissance.

5. The Salem Witch Trials Happened In the Early Modern Era

The Salem witch trials are an excellent example of the witch-hunts that happened in the early modern era. For those who could use a refresher, they consisted of a series of prosecutions of people in colonial Massachusetts that happened from February of 1692 to May of 1693. In total, more than two hundred were accused, with the result that nineteen individuals were hanged, at least five individuals died in jail, and one individual was pressed to death because of his refusal to plead. It wasn’t too long before people started challenging the results of the Salem witch trials, which is why some historians think that they played an influential role in reducing the importance of religion in colonial government.

6. The Show’s Premise Raises Serious Questions About What Happened

In any case, the show’s premise raises some serious questions about exactly what happened at the Salem witch trials in its setting. For instance, considering that its witches have real powers that outmatch the conventional weapons of the early modern era, one can’t help but wonder how the Salem witch trials happened at all. Furthermore, it should be mentioned that the modern United States is a matriarchal society in the present time, which is a huge change to say the least. It is possible that the emergence of witches caused women to take a more and more prominent role in society over time, but it remains to be seen how the show will choose to explain the whole matter.

One of the neat things about the show is that it isn’t interested in explaining everything right away, which can be a useful storytelling choice for a number of reasons. For example, the lack of answers on certain matters maintains a sense of mystery that could encourage interested individuals to engage with one another in order to discuss them among themselves. Likewise, it is an acknowledgement that the viewers can figure out things on their own, which can be appealing to certain segments with certain preferences. Still, time will tell whether the people behind the show can see their own storytelling choices through to a successful outcome.

8. The Show Uses a Pretty Standard Setup For Its Main Characters

The show uses a pretty standard setup for its three main characters in the sense that they are all different people who come from very different backgrounds, thus making for more interesting interactions between them. One is a healer named Raelle who happens to have a real rebellious streak in her, one is a sweet but naive person named Tally who grew up in a compound of some kind, and one is the very well-off Abigail who experienced a life of privilege. Unsurprisingly, they don’t get along with one another but eventually learn to respect one another.

Speaking of which, the main characters are supposed to fight terrorists called the Spree. It is unclear what the Spree want, though it has been mentioned that they are witches who are less than enthusiastic about the conscription of witches in the U.S. military. As such, it is possible that they are drawing upon a different kind of terrorist than the ones that have preoccupied the United States and the rest of the western world in recent decades because there seems to be widespread antipathy towards said policy among normal witches as well.

10. The Witches Can Be Very Long-Lived

Apparently, witches in Motherland: Fort Salem can be very long-lived because there is mention of one character who was around for the original agreement that ended the Salem witch trials. Curiously, this could mean that there are outright legends walking about in the present of the setting because contextual clues have told us that witches started playing an important role in military affairs at least as early as the American Revolution.