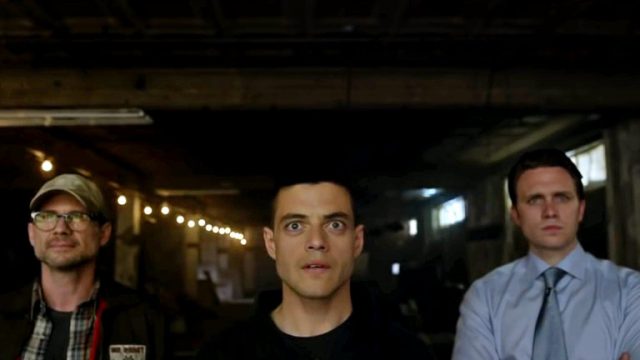 All season,Â Mr. Robot‘sÂ been lauded for its deep cinematic homages. Everything from Kubrick to Zemeckis has been on the table for these twelve episodes, with some doses of Gilliam and Lynch thrown in for sh*ts and giggles: all of it very overtly delivered, the cinematic expression pretentiously promising the audience that yes, thisÂ isÂ a really deep show, with a lot to say about identity, nature, the digital age, and the crumbling of humanity’s priorities and obsessions in the modern world. However, these stylings have never cohesed to the show’s thoroughly ambiguous narrative (filtered through an unreliable narrator, no less): as season two devolved into a series of glossy, pretentious images standing in for things like “characterization” and “plot development”. the show’s cinematic obsessions and homages finally swallowedÂ Mr. Robot and its characters whole, leading to the final ten minutes of this week’s finale,Â “eps2.9_pyth0n-pt2.p7z”, where the show finally revealed its true identity…

Seriously: there’s nothing about theÂ Mr. RobotÂ finale that suggests there’s anything more to this story than aÂ Fight ClubÂ homage that’s just going to continue once the buildings are demolished. The similarities between the final scenes of last night’s episode and the climatic moments of David Fincher’s populist think piece are abundant and undeniable: man who sees another man gets confused about what is reality, only able to see what is clear and what is not after being mortally wounded by a Bullet of Truth. There’s a woman involved (in this case, Angela) who knows more than she’s letting on, able to distinguish (and love) the different, confused identities of the main character. There’s the fool-proof, gun-involved plan by the alter ego to keep things in place, orchestrating everything down to the final detail, to the point the true protagonist of they story doesn’t actually have a place in the narrative at all. There’s the overarching plan itself, designed around leveling a financial building in the hopes it erases any physical or digital trail of debt, freeing the human kind from corporate interests or control (a thought, I might add, that comes a few minutes after a sponsored ad from HP talking about the importance of “security”).

There’s even the f*cking glitching out/fading away of the so-called antagonist, as he’s revealed to be part of the main character’s mind… to say thatÂ Mr. RobotÂ lives in homage ofÂ Fight Club feels would be false at this point, because the final act of season twoÂ ISÂ the third act ofÂ Fight Club.Â The only things missing here are Jared Leto and His Name Is Really Meatloaf – in their place,Â Mr. RobotÂ offers long, drawn out conversations pontificating vaguely about the revolutions of the future, like Morpheus inÂ The MatrixÂ if he just hung out and did mushrooms all the time. And there isn’t even any Price, Whiterose, or Angela (those ten seconds don’t count) in this finale to weave in the show’s overarching ideas about reality or identity: throw in a couple pretentious lines in the opening VO with some high-minded, empty rhetoric about the mind (this season’s most annoying, stylized part of its formula), and then it’s on to the whole Is Tyrell or Isn’t Tyrell debate, which thoroughly dominated the entire season.

The show’s central story regressing into someone else’s work wouldn’t bother me as much, ifÂ Mr. RobotÂ had anything to add to the many ancillary voices of the series, and their place in the narrative. Instead, we get ridiculous crap like Walter (seriously?!) being the man behind Joanna’s strange gifts: she thanks him by ‘tricking’ him into beating the hell out of her, which of course turns her on and serves as her primary motivation for protecting her husband (even though she’s spent the entire season banging someone else, apparently just to set them up to lie about a murder nobody actually cares about anymore). Or we get Dom, whose intelligence devolves into telling Darlene how alone she is – which by her recognition, made her more successful, because that’s the only way womenÂ canÂ be successful professional, lest you’ve forgotten the last 90 years of television and film – and trying to relate to her as a “Jersey girl”… these are not satisfying culminations of serialized stories, rather extended shrugs that suggest Esmail and his writing team punted these characters from day one of writing this season, delaying their importance to the central plot to a potential later date, when the show actually reveals what the hell is going on with Stage 2 (and 3, and 4 – how many stages are there, even?).

There are so many unanswered questions by the finale, ones we can’t just shrug off and trust the showrunner for. Why did the smartest, deadliest hackers in the world left their big plan to an emotionally unstable, completely emasculated dude in a suit (whose accent has changed completely this season, I might add again – turns out that wasn’t a harbinger of Wellick’s true presence on the show, just another inconsistency)? Given how we watched Dom grasp at straws all season, how did she suddenly put all this together? Isn’t the gun Tyrell has different than the one in the popcorn? What the heck is Angela doing? Why does the season end just as the entire city loses power? … I could continue, but you probably get the point.

With “Python”,Â Mr. RobotÂ has completely swallowed itself, happy to wallow in the shallow dramatic waters of carrot dangling storytelling and the blogger-friendly, “look at what I can do!” aping of sequences and styles from superior directors like Kubrick and Lynch (again – that Angela scene in 2.11 does NOT understand what makes a Lynch-ian sequence). I stop short of callingÂ Mr. Robot‘s sophomore effort a failure, because by all measures, this season accomplishes exactly what it wanted to do: undermine the implied power of its female characters, completely obfuscate any tangible plot development behind narrative trickery, and make a half-dozen groan-worthy “meta” references to the network it exists on. By the time “Python” reaches its lengthy, pointless post-credits scene,Â Mr. Robot‘s proven quite thoroughly this is the story it wanted to tell, and exactly how it wanted to tell it: a sentiment I can definitely applaud, but only to a certain degree, for aÂ show completely falls apart under the pressures and pretentions of the creative minds behind it. Unfortunately,Â Mr. Robot‘s second season did exactly that: with its thick rhetoric about identity and reality,Â Mr. RobotÂ presented itself as the modern existentialist drama, aÂ Tree of LifeÂ by the way ofÂ Blackhat, if you will – but in practice,Â Mr. RobotÂ has only proven capable of duplicating what came before, rather than embrace its supposed identity as a revolutionary show about revolution. Apparently, history repeats itself in every reality -Â Mr. Robot‘s acceptance of this, is perhaps the biggest letdown on television in 2016.