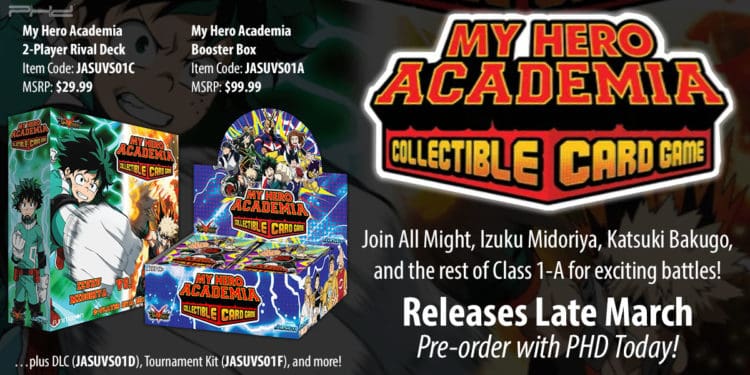 Who is Jasco Games?

Who is Asmodee USA?

Asmodee USA is in charge of the distribution of the upcoming My Hero Academia Collectible Card Game. “Asmodee USA Distribution is a sales, marketing, and distribution arm of the global Asmodee Group, a leading international company dedicated to bringing great games and amazing stories to all corners of the world. Asmodee USA Distribution represents the strongest portfolio of board games in the industry, including such favorite titles as Catan, Ticket to Ride, Spot It!, Pandemic, Just One, Dixit, X-Wing™, Dead of Winter, and many more.” Here’s what Asmodee USA had to say about the announcement. “Asmodee USA announced their exclusive worldwide English language distribution agreement for the My Hero Academia Collectible Card Game from Jasco Games. By combining their powers in a fight against boredom, this partnership will allow fans of the popular anime series and UniVersus™CCG to experience the narrative in a new way.”

What is the My Hero Academia Collectible Card Game?

When does it come out?

According to the same press release above, “The My Hero Academia CCG will launch in Summer 2021. Asmodee USA will work with select distributors to ensure the game is available to as wide an audience as possible. Stores will have access to several products for Wave 1 of the game, including: the 2-Player Rival Deck to start players off in the game; booster boxes containing 24 packs (10 random cards per pack), Deck-Loadable Content packs with set Character Cards and their Attacks, and playmats featuring iconic characters from the anime.”

As surprised as I was about this announcement, I’m incredibly excited and I hope that I can use this to get myself into the world of collectible card games. They seem to have blown up in popularity as of late, especially with Pokemon cards going out of stock in almost every major retailer on the planet. I’m definitely going to try my best to get my hands on the My Hero Academia Collectible Card Game and hopefully get a rare All Might card. Here’s hoping my luck goes well!