Home
Anime
My Hero Academia Season 5 ‘Clash! Class A vs. Class B!’ Recap 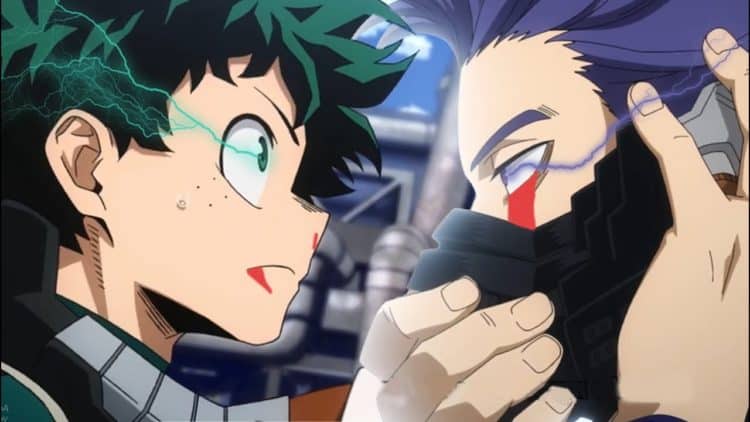 My Hero Academia kicked off Season 5 just a few weeks ago, and I’ve finally gotten around to watching the third episode of the season, “Clash! Class A vs. Class B!” If you haven’t caught up with either My Hero Academia Season 5 or the manga, I will be talking about pretty major story details. So, if you’d like to avoid any spoilers, I highly suggest either watching Season 5, Episode 3 first, or reading the manga before you read this. Curious to find out what happens in the episode? Well, now that we’ve got our spoiler warning out of the way, how about we take some time to talk about My Hero Academia Season 5, Episode 3 titled “Clash! Class A vs. Class B!”

Episode 3 opens with a flashback of Deku’s vision from the previous episode as he stands side by side with the previous users of One For All. It picks up right as Midoriya is looking down at his glowing hand after his window shatters, and the episode transitions right into the OP. Once the OP ends, we see Midoriya on a midnight run as he says he couldn’t sleep after having that dream. Aoyama knocks on the door and asks Midoriya if everything is okay, and then boldly claims that the issues Midoriya is having stems from not having enough…cheese? No, seriously, watch the episode and see for yourself, I’m not kidding. Midoriya then reflects on the “dream” he thinks he had, though is concerned with how vividly he can remember it, as well as the feeling when both he and the first user touched hands. Midoriya then confronts All-Might about this vision, where the famous formerly #1 hero confesses he too had those same visions when he was younger.

We then see a flashback to All-Might and Nana Shimura, his former master and grandmother to Tomura Shigiraki, as All-Might recalls having the same conversation with her as he is now with Midoriya. She claims that the dream isn’t a dream, but rather the vestiges of One For All, and that “feelings” always come before “power.” The feelings of those who cultivated One For All now reside within the Quirk itself and are manifested in the form of these vestiges as a sort of recording. She calls it an “impossible dream” in which even if one of the users of One For All were to fall in battle, they can always meet again within One For All. This is now becoming all the more real to All-Might as he ponders his memories and Midoriya’s own “impossible dream.”

After All-Might and Midoriya’s conversation concludes, we finally get to see the whole of Class A and Class B. Everyone has new costumes, including Bakugo, who is now donning an intimidating full black and red uniform that comes with a heat generator that protects against the cold, given that Bakugo’s Quirk is essentially weaponized sweat, this makes a lot of sense and Midoriya praises the new design, only for Bakugo to hurl more insults and threats at him, because of it. We’re then introduced to Class B as they make their grand entrance, but Aizawa makes an announcement that a special guest will be participating in the event: Hitoshi Shinso from Class C, who is working his way into the hero course. Midoriya is, as always, happy to see Shinso, while everyone else is intimidated by his arrival. However, it doesn’t seem that Shinso shares the same heartfelt compassion that Midoriya feels as he bluntly states that he is not there to make friends and that he views everyone else as a wall he must overcome. This, of course, puts a smile on Midoriya’s face, because that’s just who he is.

Class A vs Class B

The way that this Joint Training Battle works is that both Class A and Class B are split up into teams of 4 with one team on each side having 5 members with Shinso playing once on each side. The objective for each team is to capture at least 4 opponents and put them inside a makeshift prison. Each team will act as heroes, but this means that each team will appear to be a villain to the other. We get to see the beginning of the first match between Class A and Class B, as well as Shinso’s new Persona Cords, as the episode ends and we’re forced to wait another week to see what happens.