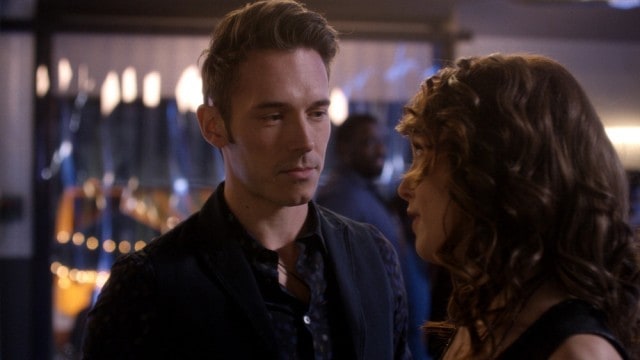 The capital of country music is turning up the music, the power plays, and the apologies all around. With all of the moves everyone in Nashville made this week, we probably should have entitled this recap ‘Slippery Slopes’ since that is exactly where everyone, minus Juliette, finds themselves.

With Cash’s help, Maddie decides to sneak out of the house and play underground “cafes”. Daphne knows that Maddie will lie to her parents about why she is going out, which sure enough she does. Daphne doesn’t intend to rat on Maddie at first, but she does eventually tell Deacon the truth. Deacon is livid to find his underage daughter at a bar and pulls her out when one of the guys gets a little handsy. Cash isn’t the least bit apologetic for taking Maddie to the bar. In fact she has the nerve to get in Deacon’s face about not supporting Maddie. Deacon finally realizes how much of a bad influence Cash is and forbids her from seeing Maddie.

Gunnar and Scarlett head out on tour this week with Autumn Chase. They realize very quickly that she’s not as sweet as pie as she pretends to be during initial encounters. Autumn is very temperamental and invasive. Scarlett is livid with Autumn’s attitude but Gunnar reminds her that they need to suck it up because it’s good for their careers. Scarlett just can’t stay silent when Autumn starts spreading around Scarlett and Gunnar’s personal history to the entire tour. Autumn thanks Scarlett for speaking her mind, but something tells me she has retaliation on the brain by the way she was handling Gunnar.

Will is back at Wheelin’ Dealin’ Records. Luke wants to jumpstart Will’s next album, which starts with sprucing up some of Will’s old songs. This means Will is going to have to work with Kevin again. I agree with Will. As far as awkward relationships go, the fact that he and Layla are good friends now is amazing. Then again, Will never really loved Layla the way he loved Kevin. Kevin has already moved on, which makes the process really difficult at first. At least Kevin and Will have the conversation they needed to have.

Now that the world knows Juliette was away in recovery and that she has officially dropped out of the Steven Spielberg movie, Juliette is trying to refocus her energy. Cadence comes first always, but Juliette longs to get back into her first love, music. She starts by going to Glenn to try to mend fences. Juliette asks him to be her manager again, and he all but kicks her out of his office. Avery encourages Juliette to be honest with Glenn about how much she misses him, and reluctantly agrees to help her. He gets Glenn to come to Juliette’s last minute performance at the Grand Ole Opry. After a tearful performance Juliette asks Glenn for forgiveness and at the very least to be her friend again. Glenn’s always thought of Juliette as a surrogate daughter, so it’s impossible for him not to say yes, and he also agrees to be her manager again.

Layla is still upset at The Exes taking over as Autumn’s opening act, and it doesn’t help that Avery doesn’t have much time for her music lately. Rayna can’t find a tour to place Layla in, so Rayna decides that she herself will be the headliner for the tour. Rayna and Deacon decide they will do the tour together. Layla doesn’t know that Rayna is planning this, so she goes to Luke and asks to be on his tour instead. When he’s hesitant to agree without Rayna knowing, Layla subtly reminds him that only they know the real way Jeff died. Rayna is sucker punched by this news but it makes her see that she herself needs to get back to the music. Layla goes two for two in the sucker punch department, asking Avery to be her band leader for the tour. She may want to wait on the celebrations for a minute, because Luke is shocked to learn at the end of the episode that Riff has disappeared. You can’t exactly have a successful tour when your co-headliner is missing.

Isn’t it ironic that now that Hurricane Juliette has returned, it’s everyone else who’s on a slippery slope?

Nashville Season 4 Episode 15 Review: "When There's a Fire In Your Heart"

Juliette seems to be the only one moving forward in Nashville this week.