NBC opted not to set up another comedy block like they currently do on Thursday nights, so it’s unclear where this new show will go when it premieres during the midseason, but the show has some producers with some impressive credentials and hits under their belts. 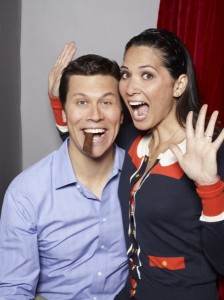 “Perfect Couples” depicts the misadventures of three engaging couples as they struggle to find out what makes the ideal relationship — and how to maintain it through humorous trial-and-error. The series explores their heroic journey in search of the perfect relationship without destroying each other in the process.

Dave (Kyle Howard, “My Boys”) and Julia (Christine Woods, “Flash Forward”) are the relatable, normal couple, but Julia’s hope of remaining the cool, low-maintenance chick is tested by Dave’s attempts to keep both his wife and his needy best friend Vance (David Walton, NBC’s “100 Questions”) equally happy. Vance, along with the neurotic Amy (Mary Elizabeth Ellis, “It’s Always Sunny in Philadelphia”), are the high-passion, high-drama couple who bring out the best and worst in each other.

The third duo features Rex (Hayes MacArthur, “She’s Out of My League”), a reformed party guy, and, and his wife, Leigh (Olivia Munn, “Attack of the Show”), who considers herself as the group’s mother hen. Believing that they are relationship experts, Rex and Leigh have attended every class and seminar on relationships — and regard themselves as the “perfect couple.”

Jon Pollack (“30 Rock”) and Scott Silveri (“Friends”) are the executive producers while Andy Ackerman (“Seinfeld,” “The New Adventures of Old Christine”) is the director. The series is produced by Universal Media Studios.

Next: Danneel Harris in “Friends With Benefits”