The newest Ms. Jensen Ackles (the guy from Supernatural) will be starring in the new midseason comedy, Friends With Benefits. And while she and her character’s friend have a convenient relationship going on while they search for the right partner, you just know they’re going to be tap dancing around their eventual attraction for each other. 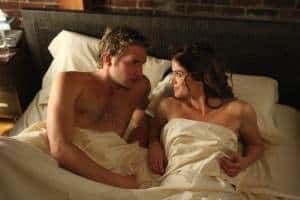 From Oscar and Emmy winner Brian Grazer (“A Beautiful Mind,” “Arrested Development”), “Friends With Benefits” is a half-hour comedy revolving around a group of twenty-something singles as they navigate the difficult, and often confusing, world of dating.

Ben Weymouth (Ryan Hansen, “Party Down”) is on the hunt for the perfect woman who meets his unique set of standards, while his best friend, Sara Maxwell (Danneel Harris, “One Tree Hill”), is just looking for a man to settle down with and raise a family. Ben and Sara have fallen into the habit of turning to each other for moral and physical support as they wait for Mr. and Ms. Right to arrive. Their friend Aaron (Fran Kranz, “Dollhouse”), a romantic at heart, doesn’t approve of Ben and Sara’s complicated friendship, but he, along with womanizer Hoon (Ian Reed Kesler) and straight shooter Riley (Jessica Lucas, “Cloverfield”), are all distracted with their own dating trials and tribulations.