Former Mad About You star, Paul Reiser, returns to headline a self-titled show midseason. Sounds like this show will be about art imitating life. 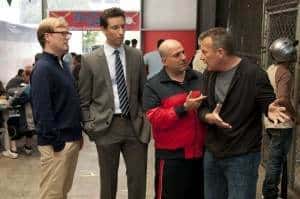 It’s been a few years since Paul’s hit TV series went off the air. Since then, he’s been enjoying the quiet life at home with his lovely wife and kids and generally minding his own business. Lately, however, Paul has been thinking that it’s time he did something new, something meaningful. As to what that next thing might be, he has no idea.

In his quest to figure it out, Paul is helped and hindered by his new “friends.” Like most men his age, Paul didn’t choose these friends. They’re the husbands of his wife’s friends, the dads of kids that his boys go to school with. Thrown together by circumstance, Paul and his friends form an unlikely comradeship — and a horrible basketball team. In addition to Reiser, Ben Shenkman (“Angels in America”) stars as Jonathan, Omid Djalili (“The Infidel”) as Habib, Duane Martin (“All of Us”) as Fernando, Andrew Daly (“MADtv”) as Brad, Amy Landecker (“A Serious Man”) as Claire, Brock Waidmann as Zeke and Koby Rouviere (“Greenberg”) as Gabe.

The pilot is executive produced and written by Reiser and Shapiro, produced by Craig Knizek (“Mad About You”), Merri Howard (“Cold Case”) and Peter Safran (“Heist”), and directed by Bryan Gordon (“Curb Your Enthusiasm”). “The Paul Reiser Show” is a production of Bonanza Productions Inc. in association with Nuance Productions and Warner Bros. Television.