J.J. Abrams’ new series, Undercovers, sound somewhat like the TV version of Mrs. and Ms. Smith, so it’s interesting to see whether audiences will respond positively to it. Abrams has a decent track record with shows (although some, like Fringe, are not the ratings powerhouses many hope they would be), and this seems different than a lot of the types of shows he’s produced in the past, so we’ll have to wait and see how well it does. 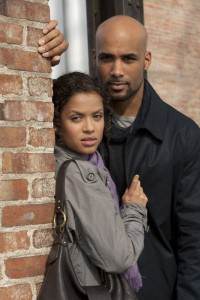 From acclaimed writer/producer/director J.J. Abrams (“Star Trek,” “Fringe,” “Lost,” “Alias”) and executive producer/writer Josh Reims (“Brothers and Sisters,” “What About Brian”) comes a sexy, fun, action-packed spy drama that proves once and for all that marriage is still the world’s most dangerous partnership.

Outwardly, Steven Bloom (Boris Kodjoe, “Tyler Perry’s Madea’s Family Vacation,” “Soul Food,” “Resident Evil: Afterlife”) and his wife, Samantha (Gugu Mbatha-Raw, “Dr. Who,” “Bonekickers”), are a typical married couple who own and operate a small catering company in Los Angeles — with help from Samantha’s easily frazzled, handful of a younger sister, Lizzy (Jessica Parker Kennedy, “Smallville,” “Kaya.”). Secretly, the duo were two of the best spies the CIA had ever known, until they fell in love on the job five years ago and retired.

With assistance from resourceful CIA field agent Bill Hoyt (Ben Schwartz, “Parks and Recreation,” “Bronx World Travelers”), whose professional admiration for Steven isn’t hard to miss, the pair is thrust back into the world of espionage, disguises and hand-to-hand combat.

Following leads that take them to cities spanning the globe, Steven and Samantha quickly realize that perhaps this supercharged, undercover lifestyle provides exactly the kind of excitement and romance that their marriage has been missing.

“Undercovers” is from Bonanza Productions Inc. in association with Bad Robot Productions and Warner Bros. Television. Abrams directed the pilot and co-wrote it, along with Reims. They also serve as executive producers along with Bryan Burk (“Fringe,” “Lost, “Alias”).

Next: Blair Underwood in “The Event”