Will The Event turned out to be the next FlashForward or Vanished, which disappeared from our TV screens (although FlashForward gets to play out its entire first season)? The concept sounds pretty cool and I really like shows like these, so I have high hopes for this new series. 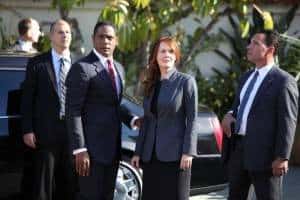 “The Event” is an emotional, high-octane conspiracy thriller that follows Sean Walker (Jason Ritter, “The Class”), an Everyman who investigates the mysterious disappearance of his fiancÃ©e, Leila (Sarah Roemer, “Disturbia”), and unwittingly begins to expose the biggest cover-up in U.S. history.

Sean’s quest will send ripples through the lives of an eclectic band of strangers, including: newly elected U.S. President Martinez (Golden Globe nominee Blair Underwood, “In Treatment”); Sophia (Emmy Award nominee Laura Innes, “ER”), who is the leader of a mysterious group of detainees; and Sean’s shadowy father-in-law (Scott Patterson, “Gilmore Girls”). Their futures are on a collision course in a global conspiracy that could ultimately change the fate of mankind. Ian Anthony Dale (“Daybreak”) and Emmy winner Å½eljko Ivanek (“Damages”) also star in the ensemble drama.

Next: Becki Newton in “Love Bites”