One of my favorite things about Ugly Betty was Becki Newton’s character, Amanda. Newton has great comedic timing and is very funny, so when news of Ugly Betty’s ending was announced, I was happy to hear that Newton had gotten the lead in another new comedy series. 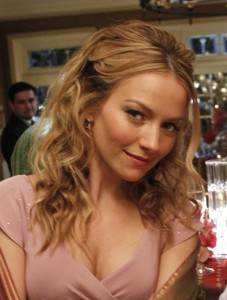 Becki Newton (“Ugly Betty”) stars as Annie and Jordana Spiro (“My Boys”) stars as Frannie, the last two single girls standing after all of their friends get married. Annie is an infectiously bubbly optimist and Frannie is an always-a-bridesmaid realist. Their story will anchor the series, while other romantically challenged characters will come and go each week.

“Love Bites” is a production of Universal Media Studios and Working Title Television, which is a new division of Working Title Films (the UK production company behind box office hits including “Love Actually,” “Bridget Jones’s Diary” and “Four Weddings and a Funeral”).

Next: Amaury Nolasco in “Chase”