Amaury Nolasco, who previously played Fernando Sucre on Fox’s Prison Break, is a really cool actor that I always love watching on TV, so I was happy to hear that he’s going to be starring in a new NBC series. Actually, three of the five leads of this new show used to star on shows on Fox (aside from Prison Break, the other two shows didn’t fare well). 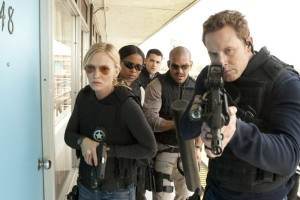 From Emmy Award-winning executive producer Jerry Bruckheimer (“CSI” franchise, “The Amazing Race,” “Pirates of the Caribbean” films) and executive producer Jennifer Johnson (“Cold Case”), “Chase” is a fast-paced drama that drops viewers smack into the middle of a game of cat-and-mouse as a team of U.S. marshals hunts down America’s most dangerous fugitives.

“Chase” is produced by Bonanza Productions Inc. in association with Jerry Bruckheimer Television and Warner Bros. Television. Bruckheimer, Jonathan Littman (“CSI” franchise, “The Amazing Race,” “Cold Case”) and Johnson serve as executive producers, while KristieAnne Reed is co-executive producer. David Nutter (“The Mentalist,” “Without a Trace” “The X-Files”) directed and is executive producer of the pilot, which was written by Johnson.

Next: Jimmy Smits in “Outlaw”