Veteran TV actor Jimmy Smits returns to the small screen this fall with the new series, Outlaw. I know, I know, you’re thinking “another lawyer show?!” But The Good Wife was a HUGE surprise hit for CBS this year (not to mention one of my favorite new shows), so let’s not count this new show out before it begins. Although, this is a tough day and timeslot to compete in. 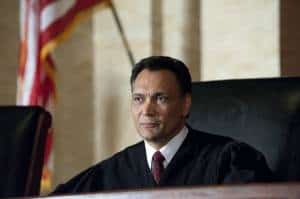 Cyrus Garza (Smits) is a U.S. Supreme Court justice who abruptly quits the high-level position. A playboy and a gambler, Garza had always adhered to a strict interpretation of the law until he realized the system he believed in was flawed. Now that he’s quit the bench and returned to private practice, he’s determined to represent “the little guy” and use his inside knowledge of the justice system to take on today’s biggest legal cases. And he’s making plenty of powerful people unhappy along the way. Jesse Bradford (“West Wing”), Carly Pope (“24”), Ellen Woglom (“Californication”) and David Ramsey (“Dexter”) also star.

Next: Summer Glau in “The Cape”