Yes, another legal drama is coming to NBC, but it’s got Kathy Bates! And she’s awesome! Plus, it’s produced by David E. Kelly and he’s got a great track record with legal dramas. 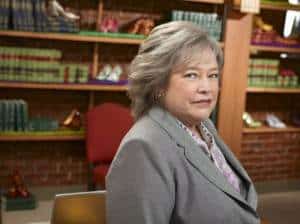 Harriet (Bates), Matthew (Ben Chaplin, “Me and Orson Wells”) and Malcolm (Aml Ameen, “Kidulthood”) couldn’t be any more different. Harriet is a curmudgeonly ex-patent lawyer who, having just been fired from her cushy job, is completely disillusioned with her success and looking for a fresh start. Her world unexpectedly collides with Malcolm’s–a young man trying to figure out life. When he finds out Harriet is a lawyer, he begs her to represent him in an upcoming criminal case. Matthew, a dreamer at heart and also recently fired from his job as a high school teacher, is introduced to Harriet through Malcolm, a previous student of his. When these three cross paths, they realize they’re all looking for a fresh start. Now, the most unlikely of people are starting a law practice in the most unlikely of places–a rundown shoe store.

Next: Jobs head to India in “Outsourced”