This new series will be pushing Parks and Recreation out of the Thursday night comedy line up and into midseason, but the biggest concern is whether some people might find this new show offensive. Judge for yourself. 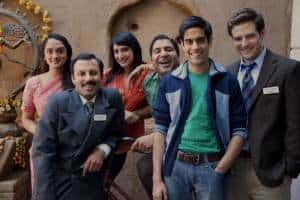 “Outsourced” is a workplace comedy series where the Midwest meets the Far East in a hilarious culture clash. The series centers on the all-American company Mid America Novelties, which sells whoopee cushions, foam fingers and wallets made of bacon — and whose call center has suddenly been outsourced to India.

Todd Dempsy (Ben Rappaport, off-Broadway’s “The Gingerbread House”) is the new company’s manager who learns that he’s being transferred to India to run the operation. Overwhelmed, Todd discovers that his new staff needs a crash course in all things American if they are to understand the U.S. product line and ramp up sales from halfway around the world. But as strange as America seems to his eclectic sales team, Todd soon realizes that figuring out India will be more than a full time job. Rizwan Manji (“Privileged”), Sacha Dhawan (BBC’s “Five Days II”), Rebecca Hazlewood (BBC’s “Doctors”), Parvesh Cheena (“Help Me Help You”), and Anisha Nagarajan (Broadway’s “Bombay Dreams”) also star as members of Dempsy’s off-shore team; Diedrich Bader (“The Drew Carey Show”) and Jessica Gower (Network Ten’s “The Secret Life of Us”) additionally star.

Next: Finding the perfect relationship in “Perfect Couples”